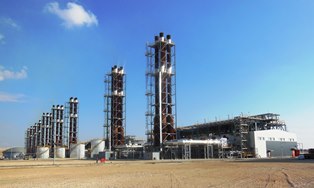 The IPP3 project near Amman is powered by 38 Wärtsilä 50DF multi-fuel engines with a combined capacity of 573 MW.

In recognition of its world record size, the plant has been accepted into the Guinness Book of Records.

Today’s ceremony will be hosted by owner AAEPC (Amman Asia Electric Power Company) and will be held under the patronage of His Majesty King Abdullah II Ibn Al Hussein of Jordan.

Wärtsilä has been responsible for leading the engineering, procurement and construction consortium to deliver what is the largest Smart Power Generation plant in the Finnish company’s history.

IPP3 will be used for covering the sharp daily peaks of electricity demand in Jordan. Fast starting and the capability of ramping output up and down quickly and efficiently are key features of internal combustion engine technology.

“By starting one engine at a time, the plant can follow the demand very precisely,” said Taemin Kim, Administration Manager of AAEPC, who added: “It is a great pleasure to witness the inauguration with Wärtsilä and other project partners. We are very proud of the world’s largest engine power plant.”

IPP3 and its sister plant, the 250 MW IPP4, have been in commercial operation since late last year. Wärtsilä said that according to data provided by the Jordanian grid operator NEPCO, “their impact on the Jordanian power grid has been remarkable”.

Since the two engine plants have covered most of the peak demand, large gas turbine power plants in the grid have been released from this task. As a result, turbines now produce steady baseload, operating much more efficiently. This leads to significant savings in fuel, energy costs and CO2emissions.

Fast-reacting back-up capacity will also be needed to balance variable renewable power as 600 MW of solar and 1200 MW of wind energy are expected to be installed in Jordan by 2020.

The plant will start to use LNG-based natural gas later this year, as soon as it becomes available. “The readiness to use different fuels was essential for us, and Wärtsilä’s engines are the optimal technology for this,” Kim said.