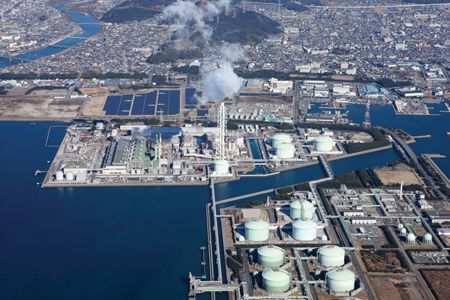 This environmentally-friendly project targeted a reduction of greenhouse gas emissions while securing a competitive power supply to support the Kansai area.

The new Himeji No.2 power station is a state-of-the-art combined cycle plant composed of six single-shaft blocks rated 486.5 MW (at 4°C) each, for a total of 2919 MW.

M501J was introduced in 2009 and its validation started in February 2011 at MHPS’ T-point verification plant.

This steam-cooled gas turbine operates at the unprecedented turbine inlet temperature of 1600°C and a pressure ratio of 23:1, featuring simple and combined cycle efficiency in excess of 40 per cent and 60 per cent respectively.

This modern plant replaced Kansai Electric’s existing Himeji power station, which had supplied power to the Kansai region since 1963 and, at 2550 MW, was the company’s largest thermal power station – a title now held by the new Himeji No. 2.

The old plant was composed of six conventional units that were originally commissioned and operated with crude or heavy oil, and later converted to natural gas. Two of the original units are still in operation.

The 1600°C turbine inlet temperature gas turbine facilitates a combined cycle net efficiency in excess of 60 per cent, and all six blocks have started commercial operation with high reliability and superior performance – the last unit was declared commercial on March 25.

In order to help mitigate the current energy shortage, the construction and commissioning schedule of this plant was carefully modified to expedite the commercial operation date (COD) of each unit from its original schedule.

The original plan contemplated the decommissioning of the existing units five and six prior to the installation of the new units four to six.

However, due to the impact of the Great East Japan Earthquake in March 2011 on the electricity system, the removal of the existing units five and six was postponed until earlier this year.

The new units four through six were constructed in the area made available by the removal of units one through three. This simultaneous removal and construction, combined with the large scale of the project in a somewhat congested industrial area, involved very complex planning and execution.

Existing facilities, especially the water intake/discharge infrastructure, were used by both the existing and new units.

Close communication and co-operation of several teams involving mechanical, electrical, I&C, and other departments was successful in preventing unintended interference with connecting piping and many other major activities in the existing and new units.

The power station was erected on filled ground, which raised concerns of ‘liquefaction’, especially during eventual future earthquakes.

In order to prevent this, the foundation work was based on the sand compaction pile method, with high bearing capacity piles used to strengthen the support of the bearing layer.

Vibration measurements were performed during construction to prevent vibration-induced trips of the existing units. Industrial waste, like clinker ash and fly ash from KEPCO’s only coal-fired plant, was effectively utilized to reduce waste and minimize environmental effects.

The clinker ash was used for foundation improvement and the fly ash was mixed in concrete.

Several existing portions of the plant, such as cooling water intake and seawater desalination, were effectively refurbished and will continue to operate during the life of the new plant.

Himeji No. 2 was conceived prior to the earthquake and tsunami that hit Japan in March 2011. In an effort to alleviate the difficult power supply situation in the Kansai area, KEPCO and its suppliers initiated an aggressive acceleration programme that expedited the COD of the first four units by two to four months.

This effort is especially important during the high demand summer/winter peak.

The state-of-the-art SRT 50 steam turbine was designed to operate with a condenser vacuum of 96.3 kPa and features 50-inch
(127-cm) steel blades that result in large annular area for high efficiency and large capacity.

The down flow exhaust enables compact installation of the condenser on the second floor level while the turbine casing is located on the third floor. This configuration fits the confined space and reduces the construction costs. Higher pressure recovery in the exhaust hood, as well as higher performance, are additional advantages. The turbine facilitates the connection to the GT and generator in single shaft arrangement with a rigid coupling system.

This plant includes several advanced features in the bottoming cycle worth mentioning. Based on Kansai Electric’s long-term thermal power station operating experience, piping support without penetration into the pipe insulation was applied to avoid rainwater intrusion and prevent outside corrosion.

Stainless steel tubes were used internally in the HRSG for durability under steam temperature in excess of 600°C.

The city of Himeji is famous for its UNESCO world heritage Japanese castle.

Special attention was placed on the architecture of the plant in order to minimize its visual effect on the landscape of the city.

Ivory and beige were selected as base colours for the façade to maintain harmony with the outer wall of Himeji castle, and green paint was selected for HRSGs and transformers to reflect the image of the Harima plain field surrounded by greenery.

In order to prevent traffic congestion during construction, special measures were applied to the roads surrounding the power station. Truck traffic from/to the site for the transportation of construction material and equipment was shifted away from the typical commuting time.

Special considerations were put in place to diminish noise and vibration levels to reduce disturbance to the surrounding community. Marine transportation of large components was maximized to minimize blockage of land routes surrounding and accessing the plant.

Cleaning of public areas surrounding the site, especially roads, riverbank and seashore, has been routinely performed by the project team.

The high efficiency of the new plant has enabled reductions of about 30 per cent for CO2 and 85 per cent for NOx compared with the original plant.

The ecological impact of the plant on the bay ecosystem is substantially reduced by lowering the amount of warm water discharge by approximately 40 per cent.