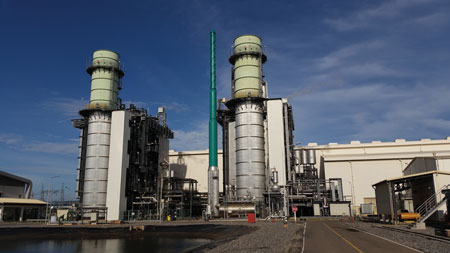 As Asia’s thirst for power continues, we profile some of the recent new projects and upgrades that are helping to meet this demand.

With an overall capacity of approximately 731 MW, it is one of the main power suppliers to the country’s southern grid. The Electricity Generating Authority of Thailand (EGAT) owns the plant and awarded an EPC contract to Siemens in September 2013 to perform a fuel oil retrofit upgrade for its two operating units. This fuel oil upgrade converted the single-fuel units to dual fuel firing capability with either gas or oil.

Siemens says that this fuel oil upgrade “is of critical strategic importance to Thailand because it allows the continued operation of their gas turbines when the offshore gas fields in the Gulf of Thailand are shut down for periodic maintenance and upgrades to maintain and enhance the gas production capabilities”.

Converting the units to dual fuel-firing allows the flexibility to burn fuel oil when gas is unavailable. In addition, it also gives EGAT the flexibility to operate with fuel oil as a backup fuel during gas shortages, thereby avoiding importing gas.

The fuel oil upgrade included the engineering, supply and installation of new equipment and the modification of various gas turbine components and auxiliary systems in order to burn the fuel oil. The control system also needed to be upgraded to handle the new operating regime. The scope of work included construction, including civil activities, and commissioning works on site, as well as performance testing.

Siemens says that the challenges that made this project unique were a comprehensive and complex turnkey scope and a very short overall time frame, requiring Siemens to start with execution in parallel to the engineering design. The installation and commissioning works began with the plant in operation to minimize the shutdown times of the gas turbines.

A team of 30 engineers were involved in the project design, which required approximately 20,000 engineering hours to complete. The project team – located in Germany, Thailand and Malaysia — maintained a continuous site presence for 13 months. The project required more than 150 shipments and 170 tonnes of material to be shipped to the site. During the peak time, more than 150 field service experts and subcontractor personnel from 10 different countries worked at the site, resulting in more than 84,000 accumulated man-hours without a single lost time incident.

The fuel oil retrofit was completed in December 2014 and final commissioning took place in May of this year with the successful completion of the reliability test..

After a recent upgrade, the output of Beijing Gaoantun Gas Thermal Power Plant reached 866 MW and its pure condensing efficiency became 59 per cent, around 1 per cent higher than the design value.

Construction of the plant started in 2012, with registered capital of $122 million. The plant installed two units of Siemens SGT5-4000F gas turbines in a 2-on-1 configuration, and used 3S clutch for the coupling of the LP turbine in order to get high efficiency for heating extraction.

With an installed capacity of 845 MW, the plant allows up to 596 MW of district heating capacity to be extracted. The 2-on-1 unit passed a 168-hour reliability test run in December 2014.

The fuel gas for the power plant is supplied by Beijing Gas Group. According to the development plan for the coming years, the fuel gas is mainly a mixture of natural gas and syngas from coal gasification, in which the hydrogen composition is much higher than the designed standard.

The plant adopted the latest developed combustion technology, which ensures the smooth operation of the turbine with high hydrogen composition fuel gas maximum of around 5 per cent.

The plant also installed a gas analyzer which provides real-time data on hydrogen. Other approaches of the upgrade included installing thermocouple to better control the increase of backfire in combustion and avoid overfiring of the burner.

The upgrade successfully solves the potential risk of unstable combustion due to the high hydrogen composition fuel gas, and protects gas turbines as well.

The power plant also took actions to update its air inflow system, including installing an additional layer of filtering increasing the intake air area by 25 per cent while reducing the speed of air flow, etc. All of these measures once more extend the lifecycle of the gas turbines’ air intake filters, which ensure more stable and efficient operation of the overall CHP application.

Units 7, 8, and 9 at the Incheon LNG combined cycle power plant were completed six weeks ahead of schedule – in the case of unit 7, after a construction period of only 22 months.

The work was carried out by Siemens for Posco Energy & Construction, and Siemens said the three new units are “the fastest-erected in South Korea”. It added that, as they are equipped with the latest H-class technology and have a total installed electrical capacity of 1262 MW and a net efficiency of 60 per cent, they are also among the country’s top power units.

Each gas-fired unit has an installed gross electrical capacity of 420 MW. The plants are designed for 250 starts per year and can power up to full load in only 30 minutes. Because of extremely limited space at the existing power plant site, Siemens designed the three units to fit within a single building.

A combined heat and power plant operated by the Beijing Jingxi Gas Thermal Power Co is playing an important role in supporting the Beijing government’s aggressive target of reducing smog and haze.

Since 2013, the Chinese government has taken a number of measures to reduce smog, including launching the ‘Beijing Clean Air Action Plan 2013 to 2017’. One of the important supporting projects for this action plan was the establishment of Beijing Jingxi Gas Thermal Power Co.

A key task of Beijing Jingxi Gas Thermal Power is to supply heat for Beijing residents during winter. The plant allows up to 883 MWh of district heating capacity to be extracted, which increases the overall efficiency of the natural gas fuel to more than 80 per cent. From its launch in the winter of 2014, the plant has been supplying heat to around 200,000 households. It is also said to it save 4.4 million tonnes of coal every year, which accounts for around 19 per cent of the total coal consumption in Beijing.

The $464 million Sembcorp Cogen @ Banyan gas-fired cogeneration facility is located in Jurong Island’s Banyan area and has a gross capacity of 400 MW of power and 200 tonnes per hour of process steam.

The plant, which commenced commercial operations in October 2014, generates electricity for the grid and steam for industrial companies on Jurong Island.

Cogeneration with sequential combustion technology is at the heart of the plant, which is believed to be the most efficient in Singapore.

The GT26/KA26-based combined-cycle power plant operates at or above 60 per cent all-around base load efficiency, with high efficiency maintained over the entire load range.

An ecoHEAT solution maximizes efficiency in both power generation and combined heat and power generation. Fuel is burned in two dry combustion stages, producing NOx emission levels that are 40 per cent lower than those of conventional systems.

These components are arranged in a single-shaft configuration. The gas turbine and generator are coupled to the steam turbine through a self-synchronizing and shifting clutch. This arrangement ensures lower maintenance expenditure associated with one less generator, transformer and high-voltage bay.

Because the plant was supplied in 11 modules, the need for on-site work was minimized and disruptions from weather and other site-related risks were reduced.

The 1240 MW Mong Duong 2 coal-fired plant in Vietnam was commissioned in April six months ahead of schedule.

Located in Quang Ninh Province, it cost $1.95 billion and was built by a joint venture between AES, Posco Energy and China Investment.

“Executing on our 7 GW construction programme is the main driver of our cash and earnings growth through 2018. Beyond Mong Duong 2, we see a number of potential opportunities for AES in Vietnam, to help meet their rapidly growing demand for electricity.”

The plant was built under a build-operate-transfer agreement and has a 25-year power purchase agreement (PPA) with state-owned utility Electricity of Vietnam (EVN), as well as 25-year coal supply deal with Vinacomin.

The PPA includes a capacity payment and a fuel pass-through that protects the project from fluctuations in coal prices.

The new Himeji No 2 power station is a state-of-the-art combined-cycle plant composed of six single-shaft blocks rated 486.5 MW (at 4°C) each, for a total of 2919 MW.

This modern plant replaced Kansai Electric Power Co’s (KEPCO) existing Himeji power station, which had supplied power to the Kansai region since 1963 and, at 2550 MW, was the company’s largest thermal power station – a title now held by the new Himeji No 2.

The old plant was composed of six conventional units that were originally commissioned and operated with crude or heavy oil, and later converted to natural gas.

The power station was erected on filled ground, which raised concerns of ‘liquefaction’, especially during eventual future earthquakes – the Fukushima disaster took place while construction was underway. In order to prevent liquefaction, the foundation work was based on the sand compaction pile method, with high bearing capacity piles used to strengthen the support of the bearing layer.

Vibration measurements were performed during construction to prevent vibration-induced trips of the existing units. Industrial waste like clinker ash and fly ash from KEPCO’s only coal-fired plant were effectively utilized to reduce waste and minimize environmental effects. The clinker ash was used for foundation improvement and fly ash was mixed in concrete.

Several existing portions of the plant such as cooling water intake and seawater desalination were effectively refurbished and will continue to operate during the life of the new plant.

In addition to generating electricity, the plant will also provide district heating for Ansan city. The combined heat and power production raises the overall fuel utilization factor to over 75 per cent, while Siemens states that its NOx emissions of 7 ppm are the lowest in Korea.

“This makes the plant one of the most efficient and eco-friendly fossil fuel-fired electricity generating plants in South Korea,” said Siemens.

The owner and operator of the plant is S-Power, headquartered in Ansan, and it is located in the city of the same name in Gyeonggi-do province southwest of the capital, Seoul.

This liquefied natural gas-fired plant is the first H-class 2+1 multi-shaft power plant in Korea and has a capacity of 834 MW.

Siemens and its partner, South Korea’s Posco Engineering & Construction, completed the plant in 24 months, from groundbreaking to first commercial operation.