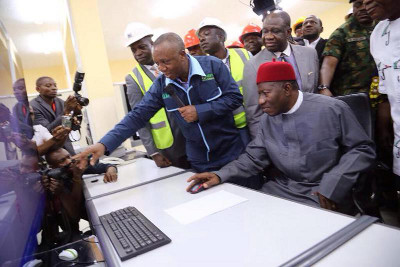 During the inauguration ceremony, Jonathan (pictured, in red hat) said his administration is “committed” to completing phase two of the project, adding that six more power plants are expected to be inaugurated before December under the NIPP programme.

“Power is key to development,” he said. “Without power, micro, small and medium enterprises cannot do well. That is the focus of this administration. For small businesses to survive, they need power. If small businesses generate their own power, their returns will be quite minimal and their turnover will be too low. That is why we are totally committed and we promise you that the second phase of this project will be completed.”

The project’s second phase will include conversion from simple cycle to combined cycle by Nigerian EPC firm Rockson Engineering, under a $665m contract. NDPHC managing director James Olotu confirmed that “construction work on the outstanding 570 MW steam turbines is continuing”, adding that, when completed, the plant will be “the largest among the 10 NIPP power stations”.

According to analysts, around two-thirds of Nigeria’s population currently has no electricity access. Last summer a Nigerian hydropower project that had been delayed for 30 years was finally given the go-ahead. When completed, the Mambilla project is expected to double the nation’s installed power capacity.