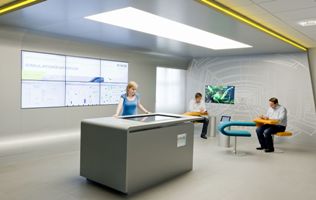 The official opening of a highly-advanced simulator, which marks an important evolution in digital control systems and power plant simulation, took place in Germany this week.

Located at Kraftwerksscule EV’s (KWS) power technology training facility in Essen, the new Simulator-Forum (pictured) was designed and built in cooperation with Siemens.

At the opening ceremony, the simulated successful start-up of a typical power plant pump rig in a fossil fired power plant was demonstrated by Jens Andreas, one of KWS’ trainers.

What was particularly interesting was that the changes made to, for example the pump flow rate, in the simulator were replicated in an actual pump rig, located two floors below, to which the simulator is networked.

Using a central console the simulator programme takes the user through a step-by-step tutorial, enabling them to work through and problem solve several different scenarios – a much safer and less costly option than doing so in an actual power station.

In his closing remarks Dipl.-Ing. Heinrich Nacke, who heads up the training at KWS, emphasized the importance of training tools such as the Simulator-Forum in developing the skills of power engineers worldwide, as well as encouraging young people into the industry.

According to Andreas, the Simulator-Forum is an invaluable addition to KWS’ existing simulator training programmes.

Power Engineering International was given an exclusive tour of KWS’ facility.

It comprises 24 modern lecture rooms, seven training laboratories and eight simulator control rooms, and between July 2011 and June 2012, it ran over 430 courses involving more than 4200 participants.

KWS works closely with a number of power generators and it is hoping to have RWE’s 1100 MW Neurath lignite-fired power station as a reference plant (control technology SSPA-T3000 from Siemens) in the near future.

It also has a mobile CCGT simulator with district heating and process steam extraction – control technology Siemens’ SPPA-T2000 – which can be taken on site to a power plant.

Further, KWS is aiming to begin running basic and advanced renewable energy training programmes, starting with wind power, at the end of September.

KWS is recognised globally as one of the major training providers to the power industry, and was established back in 1957 by a group of German power plant operators, who saw a need for such a facility.

For more information on the training course offered by KWS, please contact: Rita Urra at rita.urra@kraftwerksschule, or visit www.kraftwerksschule.com