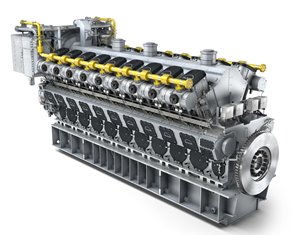 MAN Diesel & Turbo has signed a deal what it has called a “significant project” to deliver a series of gas engines for a new power plant in Gibraltar.

The plant will be built by French EPC contractor Bouygues Energies & Services and will have a capacity of 2×40 MW. It will replace several existing but dated diesel engine plants.

Global head of power sales Howard Barnes said that the contract was “a significant project for us” and explained that the Gibraltar government “was looking for reliable generation capacities with a low carbon footprint”.

“The chosen combination of gas and dual-fuel provides both. The plant benefits from low CO2 emissions when run on natural gas and yet offers full fuel flexibility via the three dual-fuel engines.”

The 51/60G is the latest addition to MAN Diesel & Turbo’s family of gas engines. The 14-cylinder version has an electrical power output of 14.3 MW and a single cycle efficiency of up to 50 per cent which can be increased to a combined cycle efficiency of over 52 per cent.