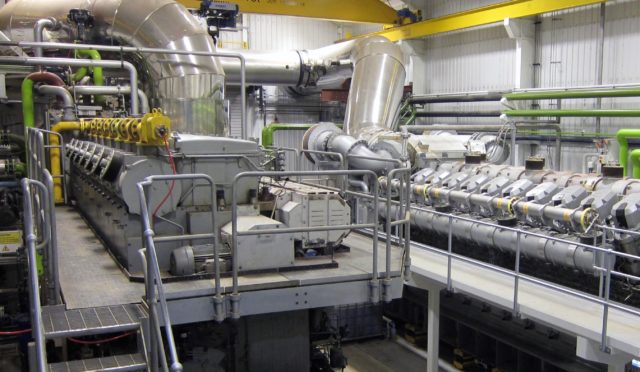 Germany’s MAN Diesel & Turbo has supplied a genset to a biogas plant in England.

The MAN 20V35/44G genset was deleivered to Wykes Engineering in Rushden, where it generates up to 10.4 MW of electrical power from biogas.

The genset supplements an existing 7L51/60DF engine that has been running on biogas at the power plant since 2014.

The plant is used to back up base load supply and now has a capacity of around 17 MW.

Wykes Engineering uses food waste such as meat, fruit juice and dairy products which have been deemed not fit for human consumption from a wide range of pre- and post-consumer sources across the food industry.

As these waste products decompose in the fermenter, biogas is produced. This biogas is then utilized to fuel both the existing and the new engine to generate power.

Hajo Hoops, senior sales manager for gas Plants at MAN Diesel, said the energy market in the UK “is particularly interesting for us, as power supplies and demand are subject to great volatility as a result of the decision to phase out coal, and this is having a direct effect on energy prices”.

And he added that “Brexit will also mean largely autonomous power supplies – that will make it extremely exciting for MAN Diesel & Turbo in the years ahead”.