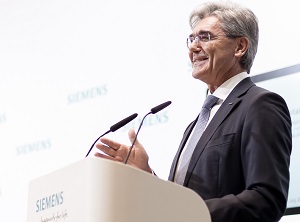 Siemens CEO, Joe Kaeser says the company’s power and gas business is to be significantly re-organised in a major overhaul of the entire Siemens business, with the announcement of significant job cuts on the way.

“We’ve understood that old-fashioned conglomerates no longer have a future,” Kaeser said Thursday. “We’ll be looking for a company structure that unites our brand’s powerful ability to integrate and one that’s backed by flexible governance processes.”
But it is the power division that is set for the most visible change, as Kaeser stated in an interview with Bloomberg, as the unit continues to suffer from weak orders and profit drops.

Profit at the division declined by 40 percent while orders for new equipment dropped.

The unit, which is suffering from a steady decline in demand for large turbines used in power plants, will be “reshaped and redone,” Kaeser said. “We know what needs to be done. We already have a plan we want to execute on.”

The company is preparing to finalise job cuts at the division, which also includes the Dresser-Rand oil services arm, as well as at the process industries and drives division. Kaeser declined to provide details on how may positions will be affected, but warned there would be “painful cuts.”

The anticipated job cuts follow an announcement Monday that the wind-power spinoff, Siemens Gamesa Renewable Energy SA, plans to shed almost a quarter of its staff.

In a statement the company predicted “unfavourable dynamics” for energy generation in the coming year.

The company has struggled to adapt to the depressed wholesale electricity prices caused by the growth of the renewable energy sector. It has damaged the economic rationale for gas-fired power plants. Underused gas turbines don’t need as much lucrative maintenance work and their role as backup power providers is threatened by battery storage.

The large gas turbine market is almost two-thirds smaller than Siemens and others expected in 2010. German utilities have ordered only two turbines in the past three years, Mr Kaeser noted.