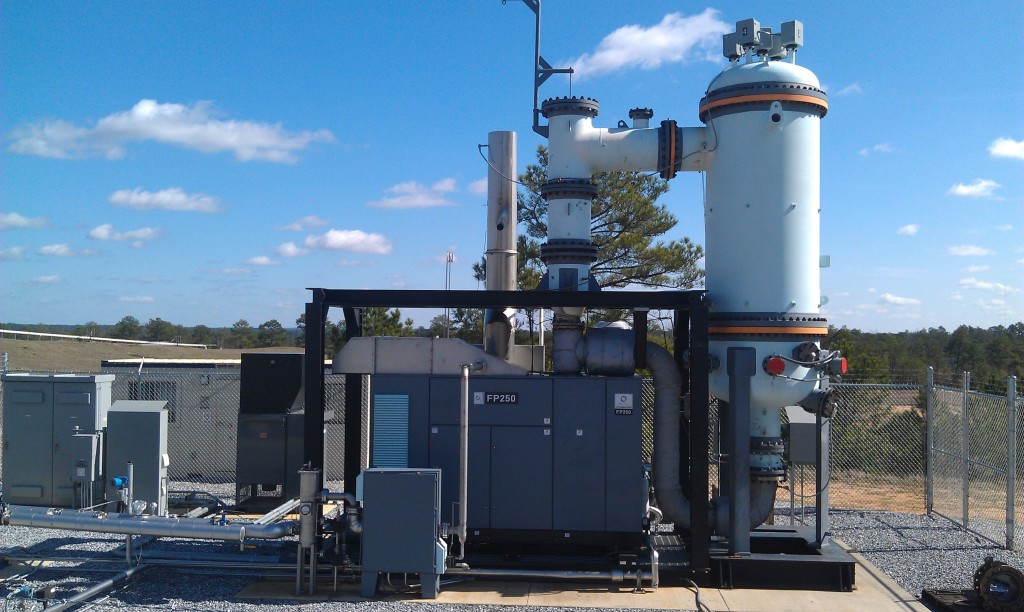 A recent meeting between Mike Cormier and one of the Chiefs of California’s 14 Air Quality Management Districts (AQMD) is instructive in understanding not just the incredible qualities of Siemens‘ new Ener-Core Power Oxidizer technology, but also how much the product’s backers have to do to get the message out to the right audience.

“I was talking to him about the project and he kept staring at me until eventually I asked him if there was a problem,” says Cormier, Dresser-Rand’s Business Development Director for KG2 and Power Oxidizer technologies.

à‚ The AQMD Chief said, ‘there’s no problem, this is just too good to be true.’

“I said I agree – making power with less than 1ppm NOx, and with no post-exhaust treatment is pretty amazing. He replied that in his territory alone they have hundreds of flares. What we’re hoping is once we get some hours on the reference units this will take off, as it’s a power-generation solution that can literally replace flares.”

While the technology now has a high profile reference case in Pacific Ethanol (the largest producer of fuel ethanol in the USA), it shows just how hard companies have to work to drive interest in a new technology, when its merits seem relatively obvious.

The conservative nature of the power industry means, regardless of the claims being made for the technology, they want to see a longer-term proof of it working in the field before committing.

It allows the Dresser-Rand business to provide industrial clients with a first-of-its-kind solution that can substantially reduce their purchases of energy from the grid while also reducing carbon and nitrogen oxide (NOx) emissions, and reducing the typical costs of running a pollution abatement system (flares, and others).

Right now, it’s a proven technology with a high profile client. Once it becomes more established at that client, Cormier expects to see momentum in its fortunes.

“While we were building the Pacific Ethanol project we were also developing post-sales customers who are anxiously awaiting results and they’re going to see them now,” Cormier told Decentralized Energy.

“While no decision has yet been made, we are taking a look at the market and seeing if there is a need for the Power Oxidizer in larger gas turbines. Right now we are offering it at a 2 MW level and there is certainly a market for it at that size, though we’re not yet sure just how large the market will be for larger units.”

While internal research continues into the suitability of the Power Oxidizer integrated within larger gas turbines, the Dresser-Rand team are promoting the 2 MW standard to clients across a broad range of industries, many of whom are, up until now, oblivious to its virtues, but ideally placed to benefit greatly from its incorporation.

“We are currently promoting it to landfill treatment plants, wastewater treatment plants and to pharmaceutical companies that generate waste gas. There is also the automotive industry where they do a lot of high-volume painting and with this new solution, gas from the waste fumes can be used to generate power. This is uniquely a CHP solution for using low quality waste gas fumes, but one of the challenges with new technology is client references. Everyone wants to see where this thing is already running.”

“With it now operating (at Pacific Ethanol) making power and steam, we want to make use of that reference and get it out there and really establish a good size installed base. After that we would look at expanding up to the next size (megawatt turbines).”

Apart from the usual difficulty in bringing a new product to market, are there any other reasons that might explain why this product hasn’t been heralded more?

“We’re focusing on customers that have waste gases that typically they have no other use for. It’s a matter of how much waste gases a customer has, and you certainly have to have enough to operate the unit which is partly what happened at Pacific Ethanol.”

The Sacramento-based company had enough waste gas to operate 25 per cent of 1 gas turbine. This prompted them to buy two power oxidizers because their facility was consuming 4 MW of power and they needed about 100,000 pounds an hour of steam. Because of this, it made sense for them to use two gas turbines and supplement a waste gas stream with natural gas, because that waste gas is effectively “monetarily free” and hence performs as a significant subsidy to the costs of their purchased natural gas, so they are realizing a substantial reduction in their plant’s operating costs by generating low-cost power from a mix of natural gas and zero-cost waste gas, while at the same time shutting down their previous pollution abatement system.

“If they’re using 12 per cent less fuel in their gas turbine they’ll still save a lot of money because once you get any type of gas turbine installed, whether it has a Power Oxidizer or not, your largest operating cost is going to be fuel.à‚ à‚  In fact, it’s fairly well recognized that 66-70% of the total life-cycle ownership cost of a gas turbine is the cost of the fuel, whereas the capital expenditure of the turbine only represents approximately 20-25% of the total life-cycle cost.”

Dresser-Rand is keen to take the Power Oxidizer into international markets. Even though ethanol is an area of breakthrough, that industry is relatively limited in the US.

Landfills are certainly a great fit and are numerous throughout the world. Although Europe, for example, is moving away in favour of digesters, landfills continue to produce gas for around 100 years after they are closed, and digesters also work well with the Power Oxidizer technology.

“Once you close a landfill, you’ve got enough volume of gas to operate a gas turbine or gas engine but only for a limited period of time ” there is only enough high-quality methane for a minimal number of years after closure; whereas this technology can enable a closed landfill to continue generating power for decades after a landfill is closed.”

“It can operate on very low energy fuels and the initial reviews show that we can extend the life of the landfill for producing electricity for probably 50 or 60 additional years beyond what a standard gas turbine or reciprocating engine is able to do. That’s just free fuel – 100 percent free gas, that can be used productively to generate energy instead of flaring it off.”

Environmentally and economically the product makes sense. When Power Oxidizers are installed, flares can be shut off and the client can make electricity with substantially less NOx emissions.- They are reducing emissions while simultaneously producing electricity, something a flare won’t do.

Similarly with the more prevalent digesters available today, the Power Oxidizer can use the waste gas produced and make electricity with ultra-low emissions.

“Pretty much every wastewater treatment plant around the world is using digesters now and those digesters are also forming gas that we can use in the Power Oxidizer and the beauty of it is that the Power Oxidizer is more tolerant to the H2S being generated in the digesters, so customers can potentially save on clean up. If you have H2S and you oxidize it, it turns into SO2 and SO3. You decide whether to take the H2S itself and the customer starts to have some options they can look at because fuel gas clean up can be incredibly expensive.”

One recent example of where the Power Oxidizer was trialled involved a landfill in the Netherlands where a 250 KW microturbine was utilised to good effect.

The available energy at the landfill was no longer enough to run the reciprocating engines, which would continually shutdown due to the low-quality of the gas. The installation of the Power Oxidizer saw re-commencement as it was capable of using the lower quality gases available.

Cormier says the potential for the Power Oxidizer technology may not remain unappreciated for very long.

“I think people don’t realise how much waste gas is out there, not just in North America, but throughout the world.”

“What we, as a global society, are either flaring or venting into the atmosphere can be used to power the whole USA.à‚  We are trying to be as environmentally friendly as we can, but we are ignoring this potentially huge stream of waste gas, and not benefiting as we could.”

“The fact is emissions are much higher from flaring than using a Power Oxidizer to destroy those emissions, and the Power Oxidizer actually generates useful and monetizeable energy, which results in a much more interesting equipment investment than an investment in a flare which does not generate any useful output product.”