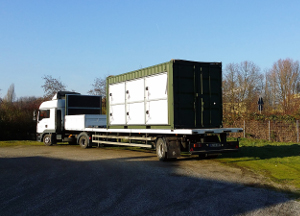 Mobile containers equipped with high-power solar photovoltaic (PV) modules have been purchased by the German armed forces as part of a programme to replace diesel gensets.

Manufactured by aleo solar, the modules are built into Multicon Solar containers, which act as mobile power plants to generate environmentally friendly power for the armed forces’ military camps and bivouacs.  Each container has a capacity of up to 27 kWp and can store up to 150 kWh of solar power. As any number of containers can be connected, they can cover electricity demands equating to several megawatts.

Manufactured in Duisburg, Germany, the patented solar containers come in four different output levels ranging from 5.4 to 27 kWp with a storage capacity of between 15 and 150 kWh. According to aleo, they can produce single-phase as well as three-phase electricity from 13 Euro cents per kWh.

‘The German armed forces need a reliable energy supply, which is why we solely depend on our own diesel generators in conflict areas. Procuring fuel for the generators is often very dangerous. By reducing our fossil fuel consumption, we could therefore protect human lives and increase our troupes’ resilience,’ Michael Schulz, senior technical civil servant in the German armed forces, said.