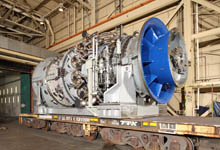 The contract is with Saudi Electricity Company (SEC) and will see GE provide the turbines plus associated equipment and services to supprt SEC’s large, combined-cycle power plants to generate more than 3.8 GW of power.

The first plant will be located in Dhurma and the second south of Riyadh.

All equipment will be manufactured in the US – the 7F-5 gas turbines at Greenville and the steam turbines and generators coming from GE’s Schenectady site. Shipment of the equipment is expected to begin at the beginning of 2015.

SEC president Ali Albarrak said he chose GE technology because it “has the ability to respond to dramatic daily changes in power demand while maintaining high levels of fuel efficiency in line with the growing power resource needs of our country”.

Can you trust the quality of non-OEM approved engine lubricants?