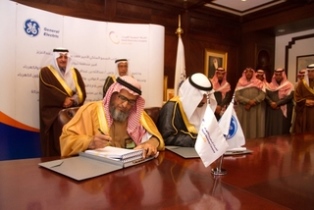 Saudi Arabia is to integrate a solar field with a combined-cycle power plant and also use condensate as a gas turbine fuel, marking a double first for the kingdom.

The project is designed to generate up to 550 MW from the combined-cycle plant while the solar field will supply steam for an additional 50 MW.

Saudi Electricity Company said it will have the capacity to generate the equivalent power to supply around 600,000 homes for a year.

SEC president Ziyad M. Alshiha said: “This part of Saudi Arabia is a developing region with limited grid interconnection, so the additional power generated by the Green Duba project will be tremendously important in supporting growth.”

He added that he expected the plant “to provide cost-efficiencies over its life cycle, along with the fuel flexibility and solar capabilities needed to support the Kingdom’s fuel conservation and renewable technology initiatives“.

GE has supplied a 7F.05 gas turbine (pictured) to operate on condensate and a 7F.03 to operate on natural gas, with Arabian Super Light crude oil as backup.

GE president for Saudi Arabia and Bahrain, Hisham Albahkali, said: “The integration of solar power and the introduction of condensate fuel at the Green Duba project is a true milestone for the Kingdom and supports the government’s vision to promote energy sector efficiency with a focus on renewables.”