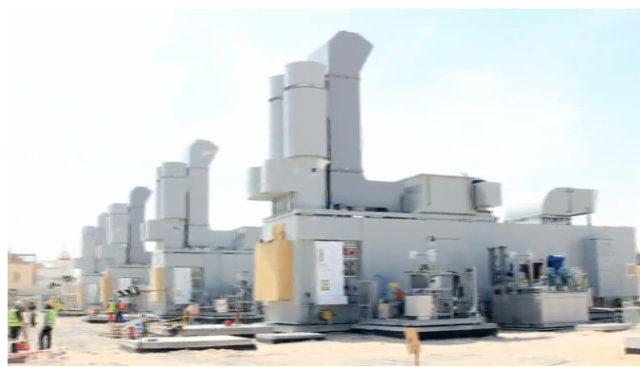 GE has signed a contract with Egypt’s government to deliver 2.6 GW of power generation capacity, the company announced today.

GE Power & Water’s Distributed Power business said it will deliver 34 of its aeroderivative gas turbines, which are expected to begin generating power in May, as well as 12 heavy-duty gas turbines to 15 sites across Egypt. The firm said the contract was signed in December 2014 and construction is currently underway.

In the project’s initial phase, fast-track power solutions including 14 LM6000 turbines and 20 mobile TM2500 turbines will be delivered to help offset Egypt’s expected summer power demand, and some of the country’s existing power plants will be upgraded with new turbines. The second phase includes plans for two full-scale power plants, which are expected to generate 1495 MW.

The project is the largest to date for GE Distributed Power. “Given the speed that was required, you can imagine that moving this amount of equipment at this speed is quite a challenge,” Darryl Wilson, vice-president and chief commercial officer, told PEi. “You have the normal logistical challenges involved with moving large equipment; road infrastucture is important, and we have to co-ordinate with the government on moving equipment into rural places.”

In addition, he noted that “you have to have the right competencies at these locations. You have to get  mechanical, electrical and power plant engineers to multiple sites, not just one site.” Then there is “clearing the sites, and getting materials in and out. It’s a significant challenge.”

Fuel flexibility is key to the project given the number of remote locations, GE said, with the turbines able to run on diesel as well as gas. “In these cases there is gas available to support the equipment,” Wilson said, “and where gas isn’t available the diesel infrastructure supports.” For the future, he said that “as the gas and fuel infrastructure of the country migrates, we can migrate with it.”

“We’re very confident that, by the end of May, the government of Egypt will have a very good outcome,” Wilson said, adding that GE had received “extraordinary co-ordination and support” from the government, including on transport, visas for staff and moving equipment through Customs.

According to Wilson, the fast-track aspect of the Egyptian programme constitutes a permanent power solution for the country. “Every country’s energy mix requires a variety of solutions,” he said. “We don’t think distributed power is only for quick emergency power – a large part of our portfolio is in installations running baseload.” Distributed power, he said, is “not just a starter kit for countries”; instead, it “should be embedded in every country’s power mix”.

Egypt’s creaking power system has resulted in regular blackouts since 2011, and analysts warn that the government will need to add at least 1500 MW per year in order to keep pace with an annual demand growth of 7 per cent. The state-owned Egyptian Electricity Holding Company (EEHC) aims to add over 12 GW in new capacity by 2018, while the Ministry of Electricity and Energy has outlined plans for 17.8 GW by 2017.