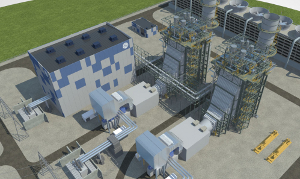 GE and EDF heralded the manufacture of what they say is the world’s largest and most efficient gas turbine technology at the Belfort Gas Turbine Centre of Excellence in France on Thursday.

The billion dollar investment has been years in the making and the first 9HA unit will be shipped to Bouchain, France, where Électricité de France (EDF) and GE are developing one of the world’s most flexible and efficient gas-fired power plants.

“With more than $1 billion in orders, customers across the globe are recognizing the value in the HA turbine,” said Victor Abate, president and CEO of power generation products at GE Power & Water. “Natural gas is leading the capacity for generation growth, and for the first time ever, more gas generation capacity will be added over the next decade than from any other fuel.”
The project in Bouchain will be the first new gas power generation combined-cycle plant equipped with GE’s 9HA gas turbine technology. It is scheduled to enter commercial service in mid- to late-2016 in the Nord Pas-de-Calais region.

The operating flexibility of GE’s 9HA Gas Turbine technology will enable EDF to respond quickly to fluctuations in grid demand, paving the way for greater use of renewable energy in support of France’s energy and environmental priorities.

With a capacity of 575 MW, it will generate power that is equivalent to the power needs of 600,000 French homes and it will do so in less than 30 minutes at greater than 61 per cent efficiency.

Cost-effective technology. GE’s technology can help save 6.4 million cubic meters of natural gas each year compared to using F-class technology. Fuel costs can be reduced by €1.8 million, at a natural gas price of €7 per gigajoule.

Nicholas Newman of Telegraph Media attended the launch and quoted French economy minister Emmanuel Macron as saying, “It is a great day for French industrial expertise and innovation.”

Newman added, “Throughout the 9HA, there are hundreds of sensors, which enable real-time performance analytics and optimize its use conditions accordingly. It is nimble for such a large beast, compared to a coal power turbine of similar size which can take up to an hour to reach full capacity, compared to GE’s 9HA gas turbine, able to achieve full output in a mere 28 minutes. For a machine this size, this is a record. This means that it is not only ideal for base load generation, but also responding to rapid market changes because of the fluctuations in demand caused by renewable generation.”

The project is part of a “strategic partnership” with GE and aimed at modernizing EDF’s thermal plants by 2023.