A heat recovery steam generator (HRSG) is a central part of the cogeneration plant supplying steam to the Total Refinery at Gonfreville in Normandy. Here, Pascal Fontaine and Philippe Naessen examine the HRSG’s fresh air firing capability, which ensures that steam supplies are not interrupted.

Petrochemical plants are major consumers of process steam, which is typically produced by captive boilers within their facilities. As old conventional boilers are retired, they are often replaced by combined heat and power (CHP) plants: steam is used for the industrial process while the power is dispatched to the grid. Indeed, there are incentives in Europe to promote cogeneration plants to reduce carbon dioxide emissions and increase energy efficiency.

Combined-cycle power plants are used for this purpose, but this presents challenges for the heat recovery steam generator (HRSG) because minimum steam production must be guaranteed even in the case of a gas turbine trip. Because steam production is so critical, it is imperative that the CHP system offers the reliability and flexibility necessary to satisfy this requirement for steam under any conditions. Consequently, HRSGs are equipped with large-capacity duct burners and forced-draught fans in order to operate in a fresh air firing mode when the gas turbines are down. Compared with conventional HRSGs, this fresh air firing concept offers challenges in terms of:

The Gonfreville power plant is located close to Total’s refinery at Gonfreville in Normandy (Figure 1). The nearby refinery needs process constant steam at 71 bar absolute (barA) (1030 psi) and 495°C. Previously this steam was generated by old conventional boilers inside the facility. The purpose of the project was to replace these exhausted boilers with a modern combined-cycle plant, thus reducing operating costs and CO2 emissions. All electricity produced in the new plant flows to the Electricité de France (EDF) grid.

A consortium called ENEVIA was set up to execute this engineering, procurement and construction (EPC) turnkey contract. Its shareholders were originally EDF along with Total Refinery and Chevron-Texaco; operation and maintenance of the facility remains under the responsibility of Total Refinery. CMI signed the contract with EDF in June 2001 and completed it in only 20 months. The Provisional and Full Acceptance Certificate were received on June 2004 and June 2005 respectively. EDF had planned a second phase involving the conversion of the two gas turbines to an integrated gasification combined-cycle (IGCC) plant based on syngas production (Chevron patented), but this option has been cancelled.

The priority is to guarantee steam production; availability and reliability come first. In order to achieve this, the plant design incorporated the following aspects:

The power plant consists of two independent power trains, each consisting of:


Modes 3 and 4 are achieved by injecting fresh air into the gas-turbine exhaust duct, upstream of the duct burners (Figure 2). Such operational flexibility is enabled by the four 50% capacity feed pumps and two 50% capacity fresh air fans supplied with each boiler. Normally only two pumps are required but the N-2 principle of redundancy applies. Maximum steam production is achieved with three pumps so that one pump is always spare even at extreme operating mode. To reach this extreme case, the HRSG is boosted using post-firing and one fan as additional air to maximize steam production while keeping the flue gas temperature below a maximum temperature of 790°C. In fresh air mode, both fans are operated simultaneously with the duct burners.

For such a cogeneration application based on high post-firing, HRSGs are generally of the horizontal gas flow type. The vertical design is more typically considered for a combined cycle that requires cycling capability. In this project, the technical specification allowed both vertical and horizontal HRSGs, but EDF eventually opted for a vertical HRSG purpose-built for this cogeneration role (Figure 2).

Below we consider the following features of this HRSG:

Although the vertical HRSG design has been proven for many years on natural circulation mode, CMI opted for assisted circulation for this special application because of the requirement for heavy post-firing up to 165 MWth. Circulating pumps guarantee sufficient water feed in the evaporator tubes regardless of the thermal load on all individual tubes, thus preventing the risk of dry-out under extreme duct firing. The boiler is equipped per circuit with three circulating pumps.

Additional fresh air is supplied by two fans each rated at 330 tonnes/hour. These fans are isolated from the fresh air induction wings by dual louvres equipped with an air barrier. This is required to protect the fans from GT flue gas. Fans are started against closed louvres. Upstream of these louvres, the induction casings are externally insulated to avoid flue gas condensation and connected with an expansion joint. This induction casing is required to distribute the fresh air into the wings and to reduce the air velocity down 35 metres/second when two fans are operated. This system was validated and modelled for a good air distribution all over the casing cross-section.

Ideally, combustion air should be introduced parallel to the ductwork connecting the gas turbine to the HRSG. But practical design considerations dictate that the combustion air enters at an angle, requiring turning vanes and wing profiles to distribute the fresh air across the duct to ensure proper mixing upstream of the burners. This more complex fresh air injection device allows intimate mixing of the fresh cold air and hot GT exhaust gas streams (Figure 3).

If a turbine is forced out of service or tripped for maintenance purposes, the HRSG serving the operating unit is ramped up quickly to its maximum capability of 350 tonnes/hour and the output of the auxiliary boiler increased to its maximum rate of 110 tonnes/hour. The boilers are designed to ramp at a rate of about 35 tonnes/hour per minute, thus satisfying the refinery’s demand for steam within a few minutes of a turbine trip. The duct burner, which is always in operation at or above the minimum rate of 5 MW, quickly increases its firing rate in order to achieve this high-speed ramping.

When one cogeneration unit’s gas turbine is out of service, its twin unit is ramped to maximum capacity while the first is reconfigured for fresh air firing. The latter is accomplished as follows:

The bypass stack is sized to permit only the turbine to roll to a stop according to the temperature curve of the GT. It is also used during off-line washing. Next, the fresh air fans are started up and the HRSG is purged. Finally, the duct burner is ignited and ramped up to achieve maximum boiler load for this operating condition within a few minutes. Although the transition to fresh air firing could have been automated by CMI, which had overall responsibility for the boiler module (including building design), EDF specified the need for manual intervention for the switch-over.

The so-called ‘fly switch over’ (FTO) does not therefore apply at Gonfreville. FTO consists of changing seamlessly from gas turbine operation to fresh air mode to FA operation while the HRSG is kept in service. Instead, each HRSG has been designed for double capacity using duct burners and GT simultaneously.

Designing the HRSG for both GT and FA operation

Critical to the design of the duct burner was the need to balance output and performance in both GT and FA operating modes. This required careful attention to ensuring uniform velocity across the burner and to calculating the length of the firing duct precisely.

Duct length also affects mixing of the combustion gas. It is important for the combustion gas entering the boiler to be mixed well enough to prevent temperature variations that might exceed the tolerance of the tube material.

Failure to design this part of the system properly can result in high emissions of carbon monoxide (CO), flame impingement on liners and overheating of boiler tubes. The following features were therefore provided in the design:

To give an idea of the challenges presented in designing for both GT and FA firing, consider that the mass flow associated with FA firing is 60%-100% of GT exhaust flow. In addition, because of its lower temperature, the velocity across the burner is 20%-40% lower. This lower velocity impedes the mixing of fuel and air, and results in longer flames.

Consequently, the duct burner is operated at the maximum gas velocity during GT operation, while baffles are used in between runners to raise dense fresh air velocity to the minimum required. The duct burner was supplied by deJong, a European subsidiary of Coen Company. It is always in operation on natural gas, normally at about 3% of the maximum rating (actual turndown ratio is 35:1) and slightly more on hot days. Turndown flexibility is facilitated by 10 runners, which can be operated in a pre-set arrangement (currently two groups). For minimum loads, some groups are stopped.

Emissions of nitrogen oxides when the gas turbine is operating are guaranteed to be below 60 mg/Nm3 at 15% oxygen (O2) dry (Table 2). When operating in fresh air mode and burning natural gas, NOx emissions are below 200 mg/Nm3 at 3% O2. The difference in the norm is because, during fresh air firing, the HRSG is considered as a conventional boiler. Carbon monoxide emissions are below 250 mg/Nm3 at 3% O2 in AA operation (Table 2). Because of the optimized air injection and the dry low NOx burners, these good emission performances were achieved without catalysts or flue gas recirculation (FGR).

The Gonfreville HRSG was prefabricated in heat exchanger modules, completely assembled and hydrotested in workshop. Each HRSG is two modules wide, for a total of six modules per boiler only. As per the CMI standard design for vertical HRSGs, each module is made up of parallel serpentine tubes mounted on tube support plates and connected to headers at each ends. As a result of this module prefabrication design, only header-to-header welds had to be carried out on-site. The American Society of Mechanical Engineers (ASME) construction code was followed and the boiler had to satisfy the new EU Pressure Equipment Directive.

The HRSGs are designed for indoor use with wrapped-around enclosure; the climate of Normandy is humid and the power plant is located on a coastal and industrial area. The buildings provide atmospheric protection and also noise abatement to meet the stringent 68 dBA requirement at 1 metre from any point of the building. The height of the stack is 90 metres.

HRSGs designed for cogeneration applications are usually a standard basic boiler. Its fresh air capability means that the cogeneration power plant at Gonfreville is not a standard HRSG. CMI designed a tailor-made HRSG to meet the stringent requirements from the refinery to satisfy the need for continuous steam production. Such specific requirements could also apply to cogeneration plants at paper mills.

To comment on this article or to see related features from our archive, go to www.cospp.com

This article is based on a paper first delivered at Power-Gen Europe in Cologne, 2006. 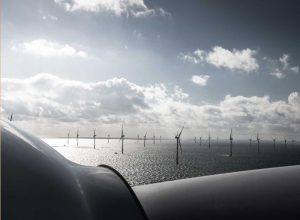