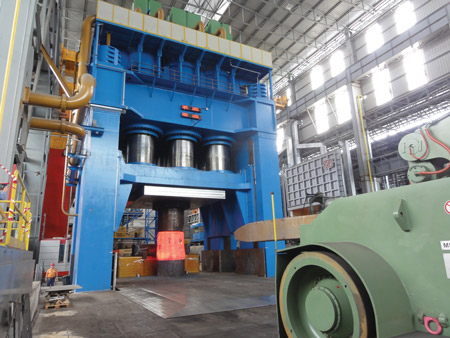 A new 100,000-tonne press for forging turbine wheels for power generation applications, located in Italy, is the world’s largest. Its engineers discuss the steps involved in working with it to produce a successful forging process

GIVA corporation consists of several divisions capable of steel melting, forging, machining and a division for manufacturing of large industrial valves for oil and gas application. The forging divisions are unique in their wide range of available hot forming equipment that include ring rolling and open die press forging.

Open die press sizes range from 1500 tonnes to 100,000 tonnes. Of interest is the new 100,000-tonne press at GIVA’s Forgiatura A Vienna facility, which is located in Terrazzano De Rho (Milan), Italy. During 2013 and 2014 this press became operational and owns the title of the largest press in the world.

To further explore the commercial applications of this equipment, GIVA established a new engineering group that consisted of expertise in forging, Ni-base alloy metallurgy, and computer simulation modeling. This was an independent staff of engineers that could work cross-divisionally to access all of GIVA’s corporate resources. In the last two years, this team has invested a significant amount of time with training, investigating and education on the modeling technics and laboratory characterization of the Ni-base alloys. Their efforts have recently matured to point where the first operational trials were completed by making large (one-metre OD) Ni-base alloy turbine discs.

Their process development method uses theoretical concepts of Process Mapping integrated with computer simulation modeling. These engineered process parameters were found to be easily implemented in the 100,000-tonne state-of-the-art press control system, allowing a reproduction of all forging parameters as given in the final computer model optimization. With this equipment and engineering tools they successfully controlled the Ni base alloy grain size and precipitate structure (delta phase) without the creation of tears or cracks during the final forging process. Their next steps are to integrate the engineering concepts and procedures for other Ni-base alloys and increase the size of the discs to two metres OD.

GIVA’s commercial interest was in turbine wheel development for power generation applications. Turbine wheels are part of the assembly of a turbine engine used to power the generator. In this case, the generator is 60 or 50 Hz running at 3600 RPM or 3000 RPM and connected to a main commercial/public power grid. Because these parts run at such high speeds and temperatures, the materials necessary to perform in these environments are critical. Ni-base alloys are commonly used to overcome these issues. These alloys are designed to avoid distortion in high-temperature environments. However, this material property also makes them more difficult to hot form (forge), requiring higher-than-normal press power to achieve the final forge shape of the part. In addition, the alloys are more prone to adiabatic heat-up and tearing if not handled properly during the forging process.

These issues are the direct results of the first law of thermodynamics, which states that the more energy you put into the system (in this case press power), an equal amount will exhibit itself as heat, mechanical tearing, and/or structural changes. Some of the resultant changes are needed; however, some are deleterious to the final product.

The concept of this energy distribution has been intensely studied within the last several decades. Several tools have evolved to explain it, one of which GIVA found to be of considerable benefit, technically named Process Mapping (PM).

Specifically, the energy distribution curves given in PM were excellent in explaining the hot forming process. The parameters used to explain the concepts were found to be the same (strain, strain-rate and temperature) as those used in computer simulation software. Therefore, a decision was made to incorporate/integrate the PM tool with the FEM code FORGENEXT to assist in prediction of the wanted and unwanted effects of the forging process.

Computer simulation of the manufacturing process (SIM) uses finite element analysis and CAD-CAM tools to project the process as a function of strain, strain rate, and temperature. Using SIM, the entire forging procedure can be simulated using iso-curves to determine such physical characteristics as:

Figure 2 is an example of a SIM profile for a rotating disc application.

This allows a prediction of the process prior to implementation or investment in raw material and manufacturing cost. For development programmes this tool has significant value in reducing the time and cost to bring a product to market. The cost of the manufacturing can be significant, especially when evaluating close-die or semi close-die forging processes when issues such as die filling, high strain regions or high potential laps areas are involved. Knowing this information prior to manufacturing avoids machining and re-machining of dies and retrials of the forging process.

Typical Process Maps are shown in Figure 3. On a two-dimensional scale, for given strain regions, power dissipation is shown as iso lines. The power dissipation variable is a dimensionless parameter that is a function of strain-rate, strain and temperature. Power dissipation is a term used to express the efficiency of removing the mechanical and thermal energy put into the forging during the hot forming operation. As mentioned before, thermodynamic equilibriums must be met during the process. How the energy is distributed in the process is important to the success of the operation. If the press energy is distributed in a deleterious fashion, defects such as forging surface tears, internal cracking/tearing and unwanted structures are formed. The PM defines the strain-rates, strain and temperatures when these problems are most likely to occur. In Figure 3 the suspect regions have been darkened with hash marks. These regions are defined, in PM concepts, as instabilities and are recommended as regions to be avoided.

When profiling and modeling a forging procedure the critical processing variables (stress-strain, stress-strain rates and temperature) directly relate to the final structure in the forged part. Integrating the potential risk areas from the PM into the SIM modeling adds another dimension to predicting the outcome of the forging process. High-risk areas are where defects such as tears can be easily determined by means of colour coding and three-dimensional imaging.

Figure 4 is an example of this integration process as developed by the GIVA engineering group. The areas of dark red visually represent high-risk material flow zones where the energy distribution is unfavourable for material flow. In other words, GIVA engineering has developed SIM software modifications that distinguish the unstable PM zones in a 3D colour-coded strain-rate/temperature map. Internally, the high-risk areas are noted by superimposing the PM on the SIM, creating a new functional parameter which GIVA Engineering defined as:

The new process parameter was reported as a direct output of the results of the forging simulation process (SIM).

It was during the two-year development programme of the PG Ni alloy disc that the GIVA group developed and used this SIM-PM tool, specifically to determine if any modifications were needed to the forging process. As noted above, the goal was to save cost and time in determining the viability of this product line for GIVA upper management.

The resultant SIM-PM integration is shown in Figure 5. This SIM-PM shows that the areas of high risk have been identified for further evaluation by Engineering. The locations of potential instability are shown in orange and red.

Using this information, manufacturing procedures were selected to avoid processing variables that may aggravate the predicted unstable regions.

These procedures would include the selection of the appropriate Ni-based alloy forging methods such as:

The results – as shown in Figure 5 – were reviewed, and it was determined by GIVA engineering that the SIM-PM profile was a viable process operation, and therefore they could release the process with detailed instructions for controlling the manufacturing forging procedure.

Communicating this complex information to manufacturing was no easy task. The process of porting the SIM-PM had to be done carefully, with all involved personnel aware of the process procedures and how the exact SIM-PM parameters were to be implemented. This required detailed instructions that were reviewed and, in some cases, mock-ups were used to train the manufacturing personnel.

In addition, the specific parameters had to be given to shop supervision and programmed into the operating systems of the 100 kt press. This was all done as part of the development process prior to the final forging procedure.

It was in the latter part of 2014 that the final trial of these engineering concepts was used in processing the Ni alloy forging. The forging trial was a success.

To the initial training, GIVA contributed SIM-PM engineering, equipment preparation and equipment SIM-PM parameter programming. A resulting disc is shown in Figures 6 and 7. This figure shows the final forging in the finished condition, directly after forging (Figure 6) and after the forging had cooled (Figure 7). A close observation of the forging in both conditions showed no defects that would be the result of forging instabilities defined by the SIM-PM process. The final result was an acceptable forging that was free of any defects that could be traceable to a PM instability (for example, surface tearing). Previous manufacturing tests had shown similar results.

This successful result of the SIM-PM process was deemed by the GIVA engineering group to be a future tool and an engineering step to be used to predict the forging processes of Ni-based alloy products.

The decision was taken to include a specific risk evaluation using SIM-PM in the determination of related PM instabilities. If the risks are deemed critical, modifications are made to reduce these risks at the SIM process stage. The SIM would be reinitialized and evaluated to determine the modification’s effectiveness. Once a forging process was determined to be acceptable, the changes would then be formally approved by engineering and the details of the forge procedure would be released to manufacturing. The release procedure included necessary shop crew training and parameter implementation in the 100,000 tonne press control system.