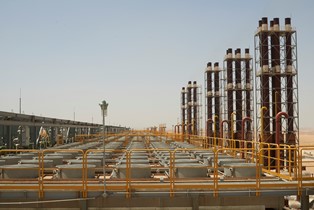 The winners of the first Power Engineering International EMEA Projects of the Year have been revealed at a glittering awards ceremony.

The awards highlight the best in power plant construction across Europe, the Middle East and Africa.

The winners were presented with their awards at a Gala VIP ceremony at POWER-GEN Europe and Renewable Energy World Europe last week in Amsterdam.

There were four awards categories. The prize for best Large-scale Gas Turbine-based Project was won by Cengiz Enerji for Samsun combined–cycle power plant in Turkey, supplied and built by Siemens. The runner up was the 1500 MW Az-Zour North Power Plant, owned by Kuwait’s Ministry of Electricity and involving principle contractor Alghanim International.

Best Renewable Energy Project was won by SolarReserve for its Jasper solar PV project in South Africa. The runner up was London Array, the world’s largest offshore windfarm, located in the UK.

The award for Best Distributed Generation Project went to an on-site energy upgrade project carried out by NEM on behalf of Slibverwerking Noord-Brabant, Europe’s largest sewage sludge incineration plant. The runner up was Atoll Energy’s QuadriTherm combined heat and power initiative, based in France.

Each nomination was judged by a panel of independent industry experts and based on technological innovation, logistical challenges in developing the project, capacity and community impact.

The Cengiz Enerji Samsun combined cycle power plant was completed two months ahead of its agreed deadline in a record construction time of only 23 months.

With a gas turbine as its key component and an installed capacity of 600 MW, the plant reaches an efficiency level of around 61 per cent, which is a new record for the 50 Hz market.

This makes Cengiz Enerji Samsun the most efficient fossil-fired power plant not only in Turkey, but also in the entire 50 Hz power plant market at present.

Siemens supplied the power island for plant, consisting of a gas turbine, a steam turbine, generator, electrical system and instrumentation and control system.

The company also supplied a Benson heat recovery steam generator and the auxiliary and ancillary systems for the plant.

Cengiz was responsible for all construction and installation work at the plant.

Cengiz Enerji Samsun is extremely flexible and is designed for 200 starts per year. After a downtime of six hours, the plant can power up to full load in less than 30 minutes. Furthermore, it can adapt its output by more than 35 MW per minute to meet the changing power requirements.

The Turkish power plant market demands environmentally friendly power generating units that are online quickly and reliably and the Cengiz Enerji Samsun plant is a blueprint for this energy strategy.

Located near Amman and owned by Amman Asia Electric Power Company, it is powered by 38 Wartsila multi-fuel engines with a combined capacity of 573 MW.

IPP3 will be used for covering the sharp daily peaks of electricity demand in Jordan. Key features of its internal combustion engine technology are the capability of fast starting, and ramping output up and down quickly and efficiently.

By starting one engine at a time, the plant can follow demand very precisely.

IPP3 and its sister plant, the 250 MW IPP4, have been in commercial operation since late last year. According to data provided by the Jordanian grid operator NEPCO, their impact on Jordan’s power grid has been remarkable.

Because the two engine plants have covered most of the peak demand, large gas turbine power plants on the grid have been released from this task. As a result, turbines now produce steady baseload, operating much more efficiently and leading to significant savings in fuel, energy costs and CO2 emissions.

The plant will start to use LNG-based natural gas later this year, as soon as it becomes available.

Construction of the project, which includes over 325,000 individual solar panels, commenced in October 2013 and full commercial operation was achieved one year later.

Modules were supplied by China’s Yingli Solar and are positioned on fixed-tilt, ground-mounted arrays spreading across a 358 acre site. Spain’s Iberdrola and South African firm Group Five, were the lead EPC/O&M partners.

During its 20-year plus operating life, the project will expend in excess of 2 billion Rand, (close to €150m), on operations and maintenance costs, with 45 per cent of the total project value being local content spend.

The original plant had a power capacity of about 450 kW. However, process analysis revealed that it would be feasible to generate significantly more electricity, considering the energy available in the exhaust of the incinerators.

Thus, SNB made the decision to replace the existing system with two new 60 bar boilers provided by NEM and a Siemens steam turbine, with an overall output of 3.5 MW.

The two boilers generate steam from the residual heat released when the sludge is incinerated. This steam drives a turbine that in turn generates sufficient electricity to cover almost all of SNB’s needs.

The plant also produces low-pressure steam that is used for pre-drying the sludge and for reclaiming raw materials.

After a year’s preparation, NEM technicians began assembling the boilers at the SNB facility in September 2014. At the project’s peak 250 people were on site.

A major challenge in the project was the limited time allowed for the tie-in of the two new boilers. The amount of incoming sludge at the facility was such that the plant essentially had to continuously stay in operation, with only one incinerator allowed to be stopped at any one time.

The replacement of the two boilers was completed in an impressive 70 days.