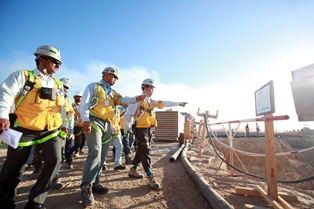 Doosan Heavy says that the milestone reinforces “the company’s commitment to outstanding safety performance across its power plant construction operations”.

The Rabigh 2 project, awarded to Doosan Heavy in 2010, involves the construction of a 2100 MW combined cycle, gas-fired plant, which is expected to be completed in 2017.

The project calls for the simultaneous construction of four plants, with around 15,000 workers from 37 countries deployed daily, which Doosan says makes the safety record “all the more significant”. All four plants are currently operating to test output.

Doosan said: “Power plants entail a higher risk of industrial accident than conventional construction projects due to a number of factors, including the cultural diversity of the workforce employed and the equipment and facilities involved.

“To mitigate these risks, Doosan Heavy has implemented a series of Environment, Health & Safety (EHS) programmes that focus on providing workers with hands-on experience and help different cultures work together in a safe environment. The programme includes training workers for real accident situations; the operation of a daily safety patrol system; and awards for exemplary workers.”

The deal was clinched by BHI, a licensee of Foster Wheeler’s global power group, and the six HRSGs will be coupled to six SGT6-5000F Siemens gas turbines firing natural gas and oil.

Woo Jong-Ihn, president of BHI, said: “We have executed a number of key projects in the Middle East and this award reinforces our position as a leading supplier in the region.”