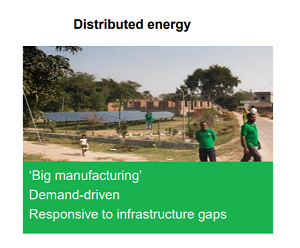 Distributed energy outside the OECD is a $40bn industry, new research has found.

The three main drivers for this growth are populations without energy access, weak grids where there is access, and the need to power distributed infrastructure such as telecom towers, the report said.

Of this 30 GW, the largest capacity addition was represented by diesel gensets, followed by backup power systems (also largely comprised of diesel gensets) and small-scale PV.

“This is not necessarily because off-grid financing is a large market,” BNEF explained, “but because many utility-scale projects in the pipeline struggle with permitting, land acquisition, securing a power purchasing agreement and financing.

“Off-grid solar companies may be able to move faster because they do not require regulated tariffs.”

Developing countries bought and installed about 600,000 diesel gensets in 2017, or an estimated 29 GW. By contrast, solar PV holds around 3 per cent of the current distributed energy capacity market, but has “considerable potential” according to BNEF, as do hybrid solar-diesel-storage systems, especially for the connected infrastructure segment.

The main advantage of distributed power systems for off-grid regions lies in their ability to be deployed quickly, BNEF found, rather than in their cost savings.

“The main difference between utility-scale energy and distributed technologies such as solar is that they are modular and pre-fabricated,” the report noted.

“Most of the economies of scale happen in the factory, not at deployment. Once they leave the factory gate, they can be deployed more quickly and in far more places than a utility-scale power plant could be.”

The report also noted that traditional utility business models are being superseded in developing countries by direct partnerships between businesses, such as telecoms, and distributed energy firms.