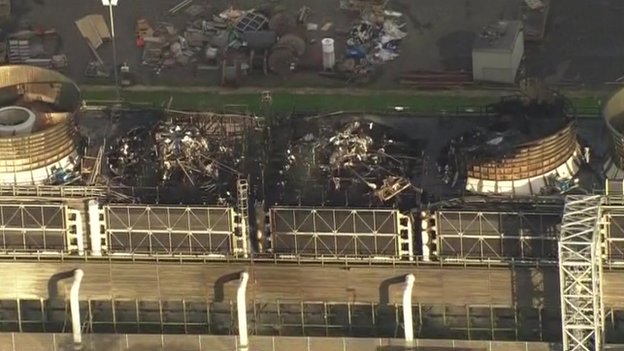 The UK’s energy secretary, Ed Davey, has received assurances that the country’s energy security has not been threatened by the partial shutting down of one of its biggest gas-fired power plants.

The RWE-nPower-run 1.3 GW Didcot B power station in Oxfordshire was the scene of a major blaze in the early hours of Monday morning, but firefighters eventually brought it under control and no injuries have been reported at the facility.

A fire services spokesman said 70 firefighters were at the scene and that the blaze had been reported to the fire service by a member of the public. He said it was too early to speculate on the extent of the damage but said the fire was “under control” and that the fire was not expected to cause any power blackouts.

The station was partially shut down but Energy Secretary Ed Davey said National Grid had assured him that there was no risk to energy supplies.
Mr Davey said: “I’ve been reassured by National Grid that there is no risk to electricity supplies. My priority is to understand the cause of the fire and get the affected unit back generating electricity as soon as it’s safe to do so.”

The incident comes just three months after Didcot A, a dual-firing power facility, was spectacularly demolished.

Didcot B has two 720 MW “modules” which provide enough power for a million homes. The fire was in a cooling tower linked to one of the modules, and it was decided to shut down that module. It was considered safe to keep the other running.

There may be a long-term impact from the fire as it may be that around half the capacity from the plant is hit, but possibly not all of it, according to the BBC.

The incident will increase fears about the UK’s energy supply margins although RWE npower spokesman Dan Meredith said: “There will be no disruptions to electricity. We have a very resilient network in the UK and the way the National Grid can operate, they are able to call upon other power stations across the country to fill the gap that this power station has left as it’s come off.”

“It’s too early to speculate as to longer term impacts,” a spokesman for the grid operator has told Business Green website. “Our 2014/15 Winter Outlook Report is scheduled for publication on 28th October. The Outlook will factor in the latest position regarding generation sources.”