Alstom and Datang to develop two CCS projects in China

China Datang Corporation and Alstom have signed a Memorandum of Understanding (MoU) to form a long-term strategic partnership and jointly develop carbon capture and storage (CCS) demonstration projects in China.

Under the terms of the MoU, Alstom together with Datang will develop two CCS demonstration projects at coal fired plants in China’s two biggest oilfields of Daqing, in Heilongjiang province, and Dongying, in Shandong province.

The plants’ proximity to oilfields should facilitate CO2 transport, use and storage. After being compressed the CO2 can also serve as an effective tool for oil pumping through enhanced oil recovery (EOR).

The launch follows the introduction in June of Alstom’s upgraded GT26 gas turbine and corresponding KA26.

“We see the role of combined-cycle power plants to be increasingly used as a back-up technology enabling more renewable power to be integrated into the energy mix,” said Mark Coxon, senior vice president of Alstom’s gas business. These products are optimised for operational flexibility as well as output and efficiency, he said.

China National Nuclear Corporation participated in early talks but did not adopt the code.and regulations. Development of the principles began well in advance of the Fukushima nuclear accident, but the completed text reflects initial lessons learned from the accident.

GE unveils 50 MW turbine as its US orderbook tops $1bn

As it revealed it has clinched gas turbine orders for North America worth more than $1bn in the last nine months, GE also unveiled its latest 50 MW gas turbine which it claimed will “transform the industry”.

The FlexAero LM6000-PH is targeted at customers that need power fast – it is designed to be installed and operational in 70 days and can fire-up in five minutes – and is a flagship of sustainability, as it operates with no need for water.

The FlexAero includes GE’s DLE2.0 technology, which reduces NOx emissions to 15 ppm without the need for water. The technology allows customers to save more than 26 million gallons of water per turbine, per year, which is typically used to dilute CO2 and NOx emissions in a gas turbine.

In winning more than $1bn worth of orders for its aeroderivative and heavy duty gas turbines for projects throughout North America since the end of 2010, GE has benefited from low natural gas prices, stricter air pollution regulations and a slowly recovering US economy.

American Superconductor Corp (AMSC) is taking a series of legal actions against Sinovel Wind Group, which it accuses of illegally obtaining and using its intellectual property.

AMSC alleges Sinovel used this information to upgrade 1.5 MW wind turbines in the field to meet proposed Chinese grid codes and to allow for the use of core electrical components from other manufacturers.

Sinovel had accounted for nearly three quarters of AMSC’s revenues until refusing in April to accept further shipments. AMSC claims Sinovel paid a systems integrator in Austria, who is now facing trial, for software and source code.

Polska Grupa Energetyczna S.A. (PGE) was due to formally open the tender on 22 September for a reactor design. PGE is expected to complete its vendor selection in mid-2013 and has targeted 2020 for commercial operation at the first plant.

Emerson: China Power Investment Group has awarded Emerson Process Management a contract to install its Ovation control system at two new ultra-supercritical units, each of 1 GW, under construction at the Changshu power plant in Jiangsu province in China.

REpower: The wind turbine manufacturer REpower has expanded its facilities in Bremerhaven and Brandenburg with a $13.7m investment to raise capacity and accommodate 3 MW turbines.

Rosatom: Rosatom and Rolls-Royce will aim for “mutually beneficial co-operation in a comprehensive series of activities in Russia, the UK and third countries”. Collaborative work could total £1bn (£1.6bn), said the office of UK prime minister David Cameron.

Rolls-Royce: The UK company has reported its first order from Poland for a gas engine powered generator – a single Bergen B35:40 16 cylinder gas engine for Introl SA of Katowice to run a CHP district heating system for the port city of Gdynia.

Siemens: Siemens and E.ON have officially inaugurated the Irsching Ulrich Hartmann 561 MW combined cycle power plant – the renamed Irsching 4 plant – which has a world-record efficiency of 60.4 per cent, according to Siemens.

Tenesol: The firm has launched what it claims is the world’s first PV energy conversion and storage solution. The company claims its Sun Smart+ system will enable solar power to be ‘time shifted’, allowing grid connected systems to self-consume energy as well as feed some power to the grid. 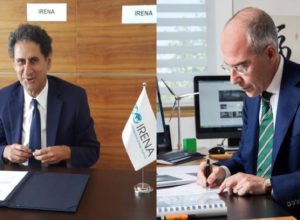