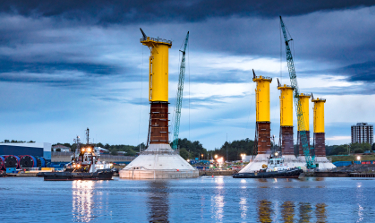 A pioneering wind farm development off the coast of Blyth, northeast England, has reached a notable milestone, with the first turbine foundation making its journey up the River Tyne on route to its final destination.

The project will see five wind turbines with a total generating capacity of 41.5MW installed around 6.5km off the coast of Blyth. Once operational, they will generate enough low carbon electricity to power around 34,000 homes.

Concrete gravity based foundations (GBFs) form part of the project and are being installed using a new “float and submerge” method ” the first time this method has been used for offshore wind turbines. Designed and built by Royal BAM Group in the Neptune dry dock on the Tyne, the GBFs are being floated into position and submerged onto the seabed to provide the support structures that act as the foundations for the installation of the wind turbines.

Each GBF is made up of more than 1,800m3 of concrete and weighs over 15,000 tonnes when fully installed on the seabed. The structures have a total height of around 60 metres from the base to the access platform.

The GBFs have been constructed at the Neptune dry dock over the past 12 months by BAM Nuttall and these structures will be floated down the river to the Port of Tyne, where extra ballast will be added ahead of their ‘tow-out’ to the offshore wind farm site.

Once the GBFs are put into position over the summer, specialist contractor VBMS will start laying the inter array cables that will connect the individual wind turbines.

Installation of five MHI Vestas V164 turbines will then commence once the cable is securely buried on the sea bed. The turbines will have a power rating of 8.3MW ” the largest to be used on an offshore wind farm.à‚  It is anticipated that the turbines will start generating power by the end of the year.

EDF Energy Renewables CEO, Matthieu Hue said: “This is the first major offshore operation on this project and over the coming months people will be able to see the wind farm being built out at sea. This ground-breaking scheme will benefit the North East of England and help the UK to meet its future low carbon electricity needs.
“This is the first time that this float and submerge method has been used on a wind farm project. The GBFs are held in place by gravity and this unique design reduces the need to use expensive marine equipment for the installation on the sea bed.”