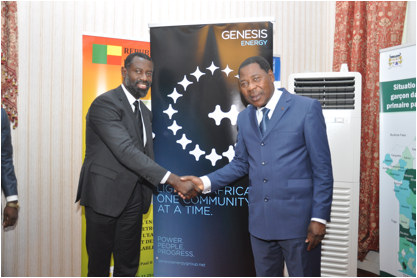 Benin is to increase its power generation capacity by over 30 per cent through a new gas-fired power project.

The 360 MW project, valued at $190m, is to be developed by UK firm Genesis Energy and is planned to include multiple plants. Benin’s President Thomas Yayi Boni and Genesis Energy CEO Akinwole Omoboriowo signed a long-term power purchase agreement this week.

The power will be supplied to Benin’s grid through the national utility, the Société Beninoise d’Energie Electrique (SBEE).

The project will be realized in partnership with GE, which will contribute gas turbines; Cummins Co-Gen UK, which will supply gas engines; and Engro Corporation, whose contribution was not specified. First up for development will be a 120 MW fast-track power plant.

President Boni said: “This agreement is very important for the government since it is in line with the Ministry of Energy’s National Energy Emergency Program, which has been researching sources of renewable energies. They have promised the people of Benin to provide every community and village with efficient and sustainable power to make up for previous power deficits.”

According to Genesis Energy, Benin has also signed concession agreements with multiple companies for gas-fired, hydro and solar power.