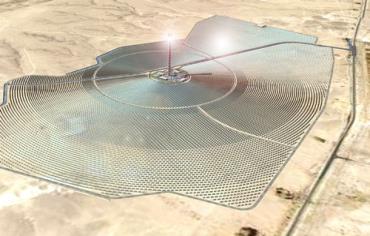 Alstom and its project partners have obtained financing to build a concentrating solar power (CSP) plant in Israel.

Financing will come from the European Investment Bank and the Israeli Bank Hapoalim.

Under the terms of its €450m contract, Alstom will be responsible for EPC on the project, as well as operations and maintenance for 25 years.

BrightSource, developer of the 377 MW Ivanpah concentrating solar plant in southern California, US, will contribute its CSP tower technology, which uses over 50,000 computer-controlled heliostats to track the sun on two axes and reflect the light to a boiler on a 250-metre tower, where superheated steam is created and then piped to a steam turbine.

The project is scheduled for completion in early 2017, Alstom said, and is expected to generate enough power for over 120,000 homes.

“The project is a further step in our partnership with BrightSource and our first success together in the solar thermal power market. It paves the way to provide cost-efficient and reliable carbon-free power to our customers ” said Jéràƒ´me Pécresse, president of Alstom Renewable Power. “This project reinforces solar thermal power’s position in Alstom’s strategy, as the desert and the sun can support sustainable growth”.

Ran Shelach and Gil-ad Boshwitz, the NOY Fund’s managing partners, said in a joint statement that “It is an honour to take part in the Megalim project and further support the development of the South of Israel region as well as the growth of the renewable energy sector here. This investment has a strategic importance within the Fund’s energy portfolio.”à‚