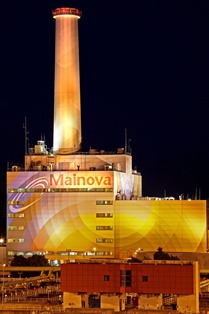 Europe‘s dynamics for traditional power generation are changing as part of the tremendous transition of energy sources sweeping the region. Within this shift, power generators continue to find their place in the new merit order.

In Germany, cogeneration as a decentralized, secure and ecological power generation solution, producing both electricity and heat, is competing in a landscape where electricity sells on a daily basis and purchases are mainly driven by the price of fuel.

Renewable energy ” solar and wind ” is used first, followed by coal. Nuclear, despite some shutdowns, is next. The last choice? Typically, natural gas. Gas prices are high, boosted by complex logistics. Many gas turbines are therefore accumulating few operating hours; even a cogeneration plant may not be profitable based on the electricity sale.

Faced with that challenging environment, Mainova, the operator of the Niederrad cogeneration station in Frankfurt, Germany, knew it had to make changes. The company took the steps needed to establish a more efficient, cost-effective, emissions-compliant approach to energy production.

The first step? Work with the equipment on-site and the OEM.

The equipment on-site for Mainova includes a GE 6B gas turbine, installed in 2005. Over the years, the unit has supported Mainova’s energy production for the Rhine-Main region, a busy and demanding area in Germany.

According to Holger Knapp, CHP plant manager at Mainova, the plant supports the energy and heating needs of “the office district of Niederrad, as well as numerous residential neighbourhoods and institutions, such as tracts of the University Clinic Frankfurt”.

Another notable customer is the Frankfurt Airport. Every year, more than 50 million passengers go through this international airport and the reliable service provided by Mainova helps keep commerce and tourism running smoothly.

With all these customers in mind, Mainova continually looks for innovative ways to generate power more effectively and improve current assets.

One of Mainova’s ambitious goals is to further reduce CO2 emissions by 30 per cent
by 2020, or 600,000 metric tonnes per year. The company believes that an integral part of realizing this vision can be accomplished by harnessing its fossil fuel-powered assets in an environmentally friendly manner through the operation of highly efficient gas and steam turbine power plants.

Strengthening efficiencies always goes along with making the most out of what’s available through smarter, tailored usage. Similarly, when tuning a car you can use less fuel and are able to drive faster at the same time. What more do you want? Even if you don’t drive faster than the speed limit, the fuel savings remain, so you can still benefit from the advantages. In the process, you gain an efficient fuel injection system, quicker stops, better acceleration and new safety features.

For power plants, advanced controls are the strategic modifications. These technologies can help plant operators tap into more operating value, pulling additional efficiency, reliability and availability from the assets.

Mainova was interested in lowering its minimum part load, reducing fuel costs at lower loads, and improving maximum heat output ” all while maintaining emission compliance. The first step toward a customized software application for its 6B gas turbine was a discussion with the GE Power Generation Services team about what OEM controls were available, and how they could help the plant be more profitable.

The discussions led to a landmark move. The GE unit in Frankfurt was the first 6B gas turbine in the world to receive OpFlex control software technology. This advanced control solution is designed to deliver broad operational flexibility across all modes of plant operation by expanding the operating envelope, while also enabling significant performance improvement. The intent was clear: use OpFlex software to make Mainova’s existing gas turbine hardware performance better, without sacrificing safe and reliable operation.

“We were relying on GE with OpFlex,” said plant manager Knapp. “James Harper, the engineer who worked on the team that developed OpFlex, was here on site personally for the commissioning. He also participated in the training and explained the background for the employees here, and that was great.”

As Knapp and others at Mainova have seen, working with an OEM on advanced controls offers advantages. For example, as the OEM for the 6B, GE fully understands the gas turbine’s design, and has operational knowledge from the largest installed gas turbine fleet in the world.

In addition, a comprehensive understanding of the physics and possibilities of the unit, based on more than 100 million hours of operational fleet data, enables the OEM to know the limits of the machine and how far an operator can safely go. A third-party solution may work, but would typically not provide the same level of performance and long-term reliability.

Optimization, Knapp says, is a key to success.

“We have to be as cost-effective as possible. OpFlex helps us to produce the steam needed for heat by adjusting the plant operations, if needed, and turning down the load. We can also specifically react to the market and decide how much electricity to produce based on its value ” all while staying within the required emission limits.”

To support optimization, the existing control system at Mainova was upgraded to GE’s current technology, the Mark VIe control system. The upgrade involved removing outdated controller and communication modules and replacing them with Mark VIe components. The migration occurred without disturbing field wiring.

The specific OpFlex solutions applied at Mainova were: AutoTune, Turndown, Cold Load Path, Variable Peak and Smart Inlet Bleed Heat (IBH). The approximate benefits on the 6B gas turbine performance at Mainova include: Turndown improvement from 60 per cent load to 40 per cent load;

Part load heat rate improvement of 2 per cent; and Emissions-compliant peak load of 110 per cent, with the ability to set emissions limits and have the turbine control to maximum performance within those limits.

The extended flexibility in terms of regulation was one of the biggest benefits of the new controls. Normally, to keep the 6B unit reliably on the grid, the standard is from 100 per cent down to 60 per cent. With the OpFlex controls, that improved to 110 per cent down below 40 per cent. In addition, the plant obtained 2 per cent fuel savings during the part load operation.

Most importantly, all of this was accomplished while remaining in range for CO2 and NOx emissions ” a key concern for Mainova.

Another user, another challenge to solve

Continuing the car analogy, the modifications that work for a ’63 Chevy might not help a ’71 BMW.

If the vehicle is being driven in California, it will need to meet more strict emissions controls. If it’s destined for Canada, the modifications had better include daytime running lights. One size does not fit all.

In much the same way, advanced controls need to be customized for each customer’s operating scenario and specific situation. For example, the East Delta Electricity Production Company operates 12 GE 9E gas turbines at the West Damietta Shabab Power Plant in Egypt. Low supply pressure was adversely affecting the availability of the units. This, in turn, was impacting East Delta’s ability to generate revenue. The GE Power Generation Services team reviewed the physics of the operation, and the pressure involved in all operating conditions. Working with East Delta, GE introduced a sliding pressure advanced controls solution, allowing operation at a lower pressure and keeping the units on the grid without compromising the gas turbines.

This changed the operation profile dramatically. The advanced controls software allowed East Delta to more consistently supply revenue-generating power to the grid while running in an efficient, emission-compliant mode of operation.