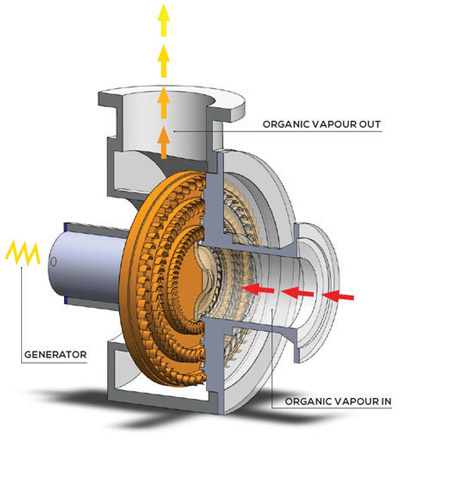 Organic Rankine Cycle systems have become a popular choice for renewable energy usage. The Radial Outflow Turbine, operational since 2012 in a variety of applications, can offer higher efficiencies for such systems, writes Anthony Hinde

In response to the global demand for clean and cost-effective energy, Exergy, an Italian subsidiary of the Maccaferri Industrial Group, has introduced an innovative technological breakthrough in the turbine sector called the Radial Outflow Turbine (ROT).

The ROT is the first turbine of its kind to be utilized in an Organic Rankine Cycle (binary) system. Unlike the axial and radial inflow configurations, the ROT converts the energy that is contained in the fluid into mechanical power, with higher efficiency than the competing technologies on the market. This pioneering system utilizes geothermal and waste heat to meet companies’ energy needs and positively influence their competitiveness.

Claudio Spadacini, founder and chief executive of Exergy, says: “By 2005 it became clear that there was a gap in the ORC marketplace for a turbine that could utilize lower quality heat sources and convert them into energy. Traditional steam turbines were not always the most efficient, flexible or economical solution in many situations, so I developed a solution that I believe has changed the heat recovery industry.

“In 2009, after years of research and testing, my vision was realized and the Radial Outflow Turbine was launched. We have entered marketplaces across the globe and provided turnkey solutions and services to a diverse range of satisfied customers.”

Radial Outflow Turbines were utilized in the past as steam turbines, but were eventually displaced by axial turbines with bearings at both ends. However, when working with an organic fluid, the advantageous characteristics of the ROT lead to a more efficient machine, rotating at a low speed with minimal noise and vibration. Its features are:

à¢€¢ Large increase in volumetric flow achieved by the increase in diameter as the fluid moves out across the disc without the need for extreme changes in blade height;

à¢€¢ No need for partial admission;

An efficient and flexible solution

The Organic Rankine Cycle (ORC), to which the ROT is applied, is used for power production from renewable energy sources including geothermal, biomass, waste heat and solar ORC systems, and performs with greater efficiency and flexibility than traditional Rankine cycle and operates under diverse conditions. The ORC is the best solution when the enthalpy level of the heat source is low, or where the size of the application is too small for a steam power plant to be the most efficient solution. Exergy’s ORC plants are available between 300 kW and 50 MW.

The ROT technology is flexible and easily adaptable under different circumstances and in various sectors. The most important sectors include geothermal, heat recovery from industrial process and power stations, biomass and concentrated solar power.

Exergy undertakes the entire product development and manufacturing process of the ORC turbine and plant internally. The process includes R&D and product development both for the turbine and the cycle components (special design of heat exchangers and package arrangements), material testing and technology validation, engineering, project management and after-sales service. Customized service for all clients ensures tailor-made solutions every time, with strong quality control procedure to ensure reliability and ongoing assistance for the life of the product. The supply chain model ensures shorter delivery times, faster response times and a more streamlined end-to-end process.

In late 2012, Exergy installed the world’s first Radial Outflow Turbine for a geothermal binary plant in Tuscany, Italy. The project was installed in Bagnore, Mount Amiata for Enel Green Power and represents a giant leap forward for green energy.

Italy was the first country where geothermal energy was exploited for industrial purposes, and it is still one of the world’s primary producers. Tuscany is the most important region for geothermal power in Italy, where the first geothermal plant began operating in 1913.

Enel Green Power, dedicated to the development and management of power generation from renewable sources and one of the world’s largest energy operators, was looking to utilize the untapped potential of an existing geothermal resource in Mount Amiata. A compact installation was needed to fit seamlessly with a 20 MW single flash plant already in place. The completed plant allows for the production of up to 1 MW of electricity, and represents the first time a Radial Outflow Turbine has been installed in a binary geothermal power plant anywhere in the world.

This installed plant project was recognized during the 2013 World GeoPower Markets Awards in Amsterdam, with Exergy named ‘Most Innovative Technology Provider 2013’.

By selecting a binary system, the client ensures that the steam never impacts the turbine directly, greatly reducing maintenance and wear and tear compared with steam turbines. The primary fluid, which is a mixture of water and steam, is passed through a sequence of heat exchangers, passing enthalpy to the secondary organic fluid. This fluid vaporizes and is passed through the Exergy turbine, driving a generator to produce power. The geothermal fluid is then re-injected back into the ground. The technological innovation facilitated the use of a geothermal source previously thought unsuitable, due to the low temperature of the primary fluid (100-180à‚°C).

The Enel plant in Bagnore uses a previously untapped geothermal source and produces electricity with zero environmental impact for approximately 2500 households, avoiding the emission of 4200 tonnes of CO2 and the consumption of 1600 tonnes of oil equivalent.

Anthony Hinde is International Marketing and Sales Director at Exergy