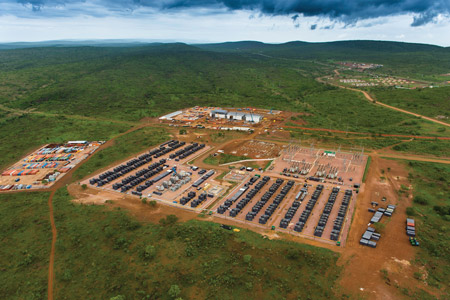 Where in Africa is Aggreko witnessing growth?

Africa faces many challenges towards improving access to affordable and reliable power sources across the continent, with around 70 per cent of the population of sub-Saharan Africa living without electricity. With this striking energy gap, the need for immediate power solutions is paramount.

Our International Power Projects division is working with a number of national utilities including those in the Ivory Coast and Mozambique. We play a key role to ensure that the lights are on and that they stay on. Underdeveloped permanent power networks coupled with economic and social growth means that the African market is an important area for Aggreko to add value, and with a sufficient and reliable supply still very much in the making, this trajectory will only continue.

Please describe several current power projects and any challenges involved due to location, climate or policy.

Renewable energy sources are increasingly popular across the continent. However, seasonal changes in the environment can have a huge impact on reliability. Intermittency reduces the efficiency of an operation and, in some cases, stops power generation altogether.

For example, we have worked with Kenya Electricity Generating Company, the country’s leading utility provider, to help them manage intermittency caused by low rainfall which reduced outputs from its hydroelectric power stations.

Aggreko supplied, installed and commissioned a 100 MW flexible power plant in Embakasi, with the first 44 MW delivered within nine weeks of the agreement. The power plant accounts for around 10 per cent of the country’s total generating capacity and has helped stabilize the national grid during the dry season. The flexibility of hired power means that the supply is scalable and tailored to the changing needs of the utility.

Prolonged drought can result in a significant reduction in the amount of electricity being generated by hydro plants. This occurred in Tanzania, where more than two thirds of the nation’s energy capacity is generated by hydropower. The reduced supply of electricity, combined with the rapid growth of the Tanzanian economy and consequent increase in demand for power, meant that power rationing was introduced and, ultimately, economic growth was hindered. In such circumstances, bringing stability to the energy infrastructure was vital.

Whilst Aggreko has provided hundreds of megawatts of emergency power in the past, it is now committed to investing both capital and valuable expertise in working towards a more medium-term, stable solution to a reliable and efficient national grid.

We also work with CI-Energies, the public utility in Ivory Coast, helping to meet the growing demand caused by rapid economic growth whilst its hydropower infrastructure programme is commissioned. The 200 MW gas-fired power plant has not only stabilized the grid, but has provided additional energy to support the local industry and allowed the utility company to export electricity to neighboring countries, which of course contributes to GDP.

Power Pools are becoming a valuable resource across Africa, not only where they facilitate international trading of power and income generation, but also by creating a more stable and reliable power structure, particularly in regions where intermittency is caused by inadequate conditions.

Aggreko’s power plant at Ressano Garcia in Mozambique injects power directly into the South African Power Plant (SAPP) network, providing energy to three national utilities including Namiba, more than 1500 km away. It began operating in July 2012 in what was the realization of a ground-breaking initiative to build the world’s first interim cross-border Independent Power Producer (IPP) project.

What do you see as the greatest challenge working in the African market?

The African market faces many economic and environmental challenges, and these can have a significant impact on a utility’s ability to ensure a reliable and cost-effective source of power.

Reaching remote locations and dealing with harsh environments – from sand storms and droughts to high altitudes with freezing temperatures – is a challenge, but one that Aggreko is able to overcome due to the mobility of our fleet, which we can transport within days rather than months. Our 20-foot (six-metre) stackable containerized units are designed to be easily transported by sea, air or land. We also choose to use 10 mm thick steel for our bed-plates (where the norm is 6 or 8 mm) to extend the operating life of our engines, which is particularly beneficial to longer-term projects in remote locations.

Extreme temperatures can significantly reduce the efficiency of an engine. Aggreko’s ultra-efficient G3+ engine has been retrofitted to operate in high temperatures, and to de-rate at a much higher temperature than others on the market. Aggreko generators are adapted for the ambient conditions of the country to ensure they provide an optimal yet cost-effective level of energy. An Aggreko generator will be picked up and put down hundreds of times during its working life, and may be required to work faultlessly at 50°C in the Saudi Arabian desert and a few weeks later at -40°C in Siberia.

Flexible power – particularly in short-term, emergency scenarios – could be considered expensive. By enabling a more efficient service, we help reduce our customer’s fuel costs with our heavy fuel oil (HFO) G3+ engines, producing power at around half the cost compared to traditional diesel alternatives. By offering our customers engines that can run on gas, diesel and HFO, we can help tailor power plants to ensure they are as cost-effective and efficient as possible depending on their specific needs.

Whilst we have a number of service centres in Africa, all of our equipment is developed at our global manufacturing centre in Scotland. By designing and developing our own generators, we can ensure these meet the changing demands of our customers quickly, giving us a competitive edge. Whilst there are many small players within local markets, like Nigeria for example, our world-class servicing and 50 years of experience in the industry reduce the risk of breakdowns and power disruptions, protecting our customers’ ability to meet demands. Our engineers can take learnings from projects around the world to ensure our customers are getting the best quality service at international standards.

In Africa in particular, do you find that temporary power installations are increasingly becoming semi-permanent and, if so, why?

The duration of the power plant depends on so many different factors and each project will have its own set of needs and challenges. Where our generators play a role over a long period, however, the utility still benefits from the characteristics of hired power.

It brings an element of flexibility mentioned earlier. For example, we often provide power during the commissioning of a power plant (where the power demands can fluctuate considerably) or whilst a utility continues to develop its generation network. This allows the utility to continue or start contributing to the grid immediately.

Flexible power can also play a role during planned outages for maintenance or, as discussed previously, reduced utility capacity due to intermittency in renewables. By scaling capacity up or down by as little as 1 MW, hired power allows for more precise operation and customers can achieve optimal productivity.

It’s important that the site is left as we found it when it’s decommissioned, regardless of how long we’re been there. We take into consideration the legacy of a power plant and the long-term effects of our presence in an area. For example, where we are required to build a road for access, the local community will benefit from this new infrastructure, especially those in very remote locations.