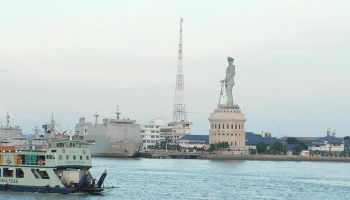 The Indonesian port of Tanjung Perak in the city of Surabaya is to be powered on-site by a 50 MW gas-fired power plant after the government committed $99m to the project.

The facility will power the new Teluk Lamong Multipurpose Terminal at the port with engineering, procurement and construction (EPC) contractor PT Rekayasa Industri to undertake the project on behalf of the state-owned port operator, PT Pelindo III.

Driven by two 25MW gas turbines, the plant will power the $336m terminal which is expected to consume large volumes of electricity, an estimated 120 MW, by the time it reaches its planned size and berthing capability in 2020.

Gas to Power Journal says PT Pelindo III expects it will only need 16 MW in the first phase of operations.

The port equipment that requires electric power at the terminal includes automated container transporters as well as automated stacking cranes, according to the port operator.