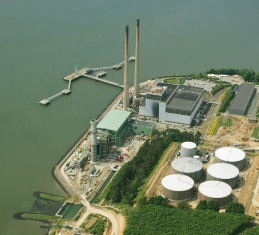 The facility will be Ireland’s cleanest and most efficient power station and will replace the existing 240 MW fuel oil unit at the site, significantly decarbonising electricity generation in the all-island Single Electricity Market.
Premier Construction News reports that work is progressing well so far with the installation and commissioning of the 460 MW Mitsubishi Heavy Industries gas powertrain being completed, as well as the gas and electricity grid connections to the site being underway.

$58m has also been invested in completing a 41km industrial-grade gas pipeline from Bawnlusk, Co. Kilkenny to the site, through partnership with state-owned Gaslink and Bord Gais Networks.

“I also hope that this plant and the new gas pipeline that SSE has completed in partnership with Gaslink and Bord Gais Networks, will be a key enabler to attracting further new employment to the South East.”

The Great Island CCGT is the single largest capital project in power generation that SSE is currently developing in either the UK or Ireland. Upon completion next year, the project will generate enough electricity to power around half a million homes and will significantly decarbonise electricity generation in Ireland.