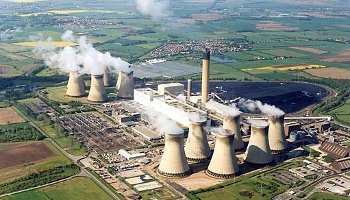 They are the Peterhead Project in Scotland and the White Rose Project in England.

of the carbon dioxide from part of an existing gas-fired power station before transporting and storing it in a depleted gas field under the North Sea.

White Rose in Yorkshire involves Alstom, BOC and National Grid and also targets 90 per cent of emissions from the Drax coal power station (pictured) and storing it in a saline aquifer beneath the southern North Sea.

UK Energy Secretary Ed Davey said today’s announcement “moves us a significant step closer to a carbon capture and storage industry. These two are major infrastructure projects potentially worth several billion pounds and could support thousands of construction jobs over the next few years.

UK Energy Minister John Hayes said the projects were “just the start of working quickly to our goal of a cost competitive CCS industry”.

He said there is “significant appetite from industry to invest in UK CCS, providing jobs and investment opportunities. It is my intention to work with industry, beyond these two projects, to ensure we have further CCS projects by the end of the decade.”

The government will now undertake discussions with Peterhead and White Rose to agree terms by the summer for front end engineering design studies, which will last approximately 18 months. The government expects to take a final investment decision on the schemes in early 2015.

The news comes after Jeff Chapman, chief executive of the UK’s Carbon Capture and Storage Association, warned earlier this month that if Britain did not “get the policy over the line in the next month or two”, investor interest in CCS will evaporate.

Chapman said that so far the UK had “allowed projects to wither on the vine” and now, with other developments abroad gathering apace, Britain’s chance to take a lead on CCS was “ours to lose”.

“It is low-hanging fruit,” he said. “In the UK we have abundant storage that is acceptable: it is not in anybody’s back yard. In the UK we are galvanised, we are ready for action. We have a range of projects under active development – we need to keep these projects alive and kicking.”

The CCS competition winners were announced in the House of Commons by Chancellor George Osborne during his Budget speech, in which he also unveiled tax breaks to kickstart the shale gas industry in the UK (click here for full story)