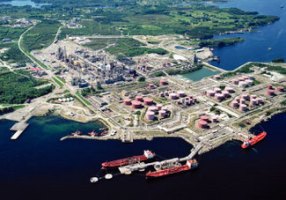 Statoil, Norway’s oil and gas giant, is expected to announce a tender in the coming weeks for a full-scale carbon capture plant that will be located at a combined heat and power (CHP) plant, Reuters reports.

The aim is to capture up to 1.5 million tonnes of carbon dioxide per year from flue gases coming out of its 280 MW natural gas-fired CHP plant, which supplies power and heat to the nearby Mongstad refinery (pictured) and Norway’s biggest gas field, Troll.

“We plan to call a tender to supply carbon capture technology in a few weeks, and our plan is to award the contract before the summer of 2014,” Kai Lima, Statoil’s vice president for CO2 management, told Reuters.

Parliament is expected to approve the final investment decision in 2016.