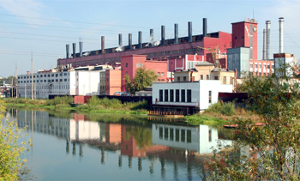 Fortum has commissioned unit 1 of its Chelyabinsk GRES combined heat and power plant (pictured) in Russia.

The unit’s certified capacity is 247.5 MWe and 174.45 MWth. Fortum starts to receive capacity payments for Chelyabinsk 1 under the Russian government’s Capacity Supply Agreements (CSA) as of 1 December 2015. Unit 2 of Chelyabinsk is expected to start commercial operation in early 2016, a slight postponement due to delays in construction.

Upon completion, the combined capacity of the Chelyabinsk GRES units 1 and 2 will be 495 MWe.
‘Our new CHP units are more efficient and competitive than the older units. In addition, they have significantly lower fuel consumption and five times lower NOx concentration of flue gases compared to the old equipment at the Chelyabinsk GRES power plant,’ said Alexander Chuvaev, Executive Vice President, Russia segment of Fortum.

In a related development, the European Commission has approved the acquisition of joint control over a combined heat and power plant in Kaunas, Lithuania, by Fortum and Lietuvos Energija.

Coming under the EU Merger Regulation, the ruling will allow the Lietuvos Energija and Fortum joint venture to be a new competitor on the Kaunas district heating market. The Commission concluded that the proposed acquisition would raise no competition concerns.

Fortum and Lietuvos Energija signed an agreement on investment in the construction of a Kaunas CHP plant, worth some EUR147 million. The new CHP plant is expected to generate approximately 500 GWhth and 170 GWhe annually.