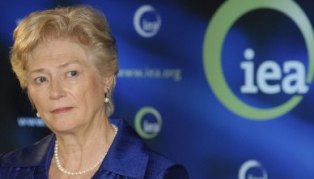 Speaking in London, IEA Executive Director Maria van der Hoeven (pictured) said: “Climate change has quite frankly slipped to the back burner of policy priorities. But the problem is not going away ” quite the opposite.”

The IEA wants to see a global temperature increase of no more than 2à‚°C by 2020, but Ms van der Hoeven said the figure was more likely to be between 3.6à‚°C and 5.3à‚°C.

Yet she stressed that “much more can be done to tackle energy sector emissions without jeopardising economic growth ” an important concern for many governments”.

Last year in the US, a switch from coal to gas in power generation helped cut emissions by 200 million tonnes (Mt), bringing emissions back down to mid-1990s levels. Meanwhile, China experienced the largest growth in CO2 emissions (300 Mt), “but the increase was one of the lowest it has seen in a decade, driven by the deployment of renewables and improvements in energy intensity”, says the IEA.

The IEA wants to see four measures put into policy by governments worldwide:

POWERGEN International postponed until May 2022