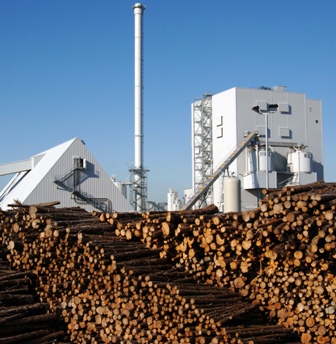 German energy firm E.ON has pulled the plug on plans to develop a 150 MW biomass plant in the UK.

The company had already secured planning permission from the government for the plant at Portbury Dock in Somerset, which would have burned largely imported wood materials.

But today it announced it was not going ahead with the project.

In a statement the company said: “In reaching this decision we considered many factors, however under the current regulatory and policy framework we concluded that this project was not a priority investment for E.ON.”

It added that it “remains committed to investing in the UK”.

An E.ON spokesperson said: “We continue to believe the UK could be a good market for investment in which sustainable biomass has an important part to play.”

E.ON already owns and operates a 44 MW dedicated biomass plant at Steven’s Croft (pictured), near Lockerbie in Scotland, and is building a 30 MW plant at Blackburn Meadows near Sheffield in England.

Earlier this year RWE npower decided to halt work on Tilbury ” the largest 100 per centà‚ biomassà‚ plant in the world.

Tilbury opened as aà‚ coal-firedà‚ plant in 1969 and in 2008 RWE decided the power station would opt-out from the EU’s Large Combustion Plant Directive (LCPD), meaning it would shut after 20 000 hours of operation or by the end of 2015.

RWE then chose toà‚ convertà‚ it to run on biomass and in 2011 started to change the plant’s units, which with a capacity of 750 MW made it the biggest biomass plant in the world.

However in July it decided to stop the conversion work and Tilbury will now officially close under the LCPD legislation next week.