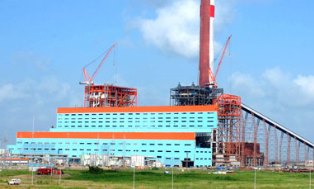 For the first time, two coal-fired power stations in India have been honoured in the Peabody Energy Advanced Energy for Life Clean Coal (AEFL) Awards, which was staged at last week’s POWER-GEN India & Central Asia Conference & Exhibition in New Delhi.

The recipients of the awards were Essar Power Gujarat for its Salaya I thermal power plant and CLP India for its Jhajjar power plant.

Salaya I, which is a 1200 MW plant located in the state of Gujarat, was honoured for demonstrating the lowest emissions profile for both sulphur dioxide (SO2) and NOx.

Based on data collected and analysed by Peabody Energy, Salaya I’s SO2 emission rate is 0.87 g/kWh, which is significantly below the US average of 1.79 g/kWh.

However, it is its NOx emission rate that is the most impressive. At 0.19 g/kWh, Salaya I sits well below the 0.29 g/kWh achieved by the top 10 per cent of thermal plants in the US.

Jhajjar, which received the award for the lowest heat rate, is a 1320 MW supercritical power station located in the northern state of Haryana and commissioned three years ago.

Based on data collected and analysed by Peabody Energy, Jhajjar has a heat rate of 10,028 kJ/KWh (HHVnet), making it 9 per cent more efficient than the US average of 11,034 kJ/KWh (HHVnet).

The Awards took place during the Inauguration Ceremony of POWER-GEN India & Central Asia on Thursday, 14 May.

Hosted by Jacob Williams, vice-president of Global Energy Analytics at Peabody Energy, the awards were presented by Shri Devendra Chaudhary, Special Secretary in the Ministry of Power.

Regional winners will be recognized at other POWER-GEN events, including POWER-GEN Europe and POWER-GEN Asia, with the global winner announced at POWER-GEN International in Las Vegas this December.