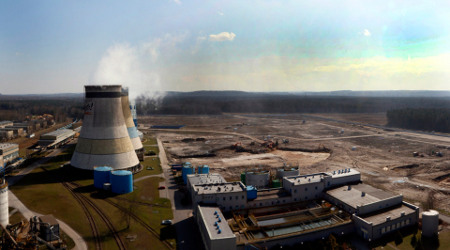 Emerson Process Management has won a contract to automate a new 910 MW unit at a Polish coal-fired power plant, the firm has announced.

Under the terms of the $76m contract, Emerson said it will serve as the main automation and electrical contractor for the new unit at energy supplier Tauron Wytwarzanie’s 1350 MW ultra-supercritical power plant (pictured) in the city of Jaworzno. The firm said it will provide comprehensive design, engineering, installation, commissioning and startup support services.

The unit, expected to be commissioned in 2019, is designed to meet EU emissions targets. It is being built by a consortium consisting of engineering company Rafako and construction firm Mostostal Warszawa and its output could provide 5 per cent of Poland’s power needs.

Sources say there has been a coal-fired power plant on the site since 1898, although earlier units were upgraded in the 1950s and 1970s, and finally decommissioned in 1998.

Tauron, which is 30 per cent state-owned, supplies around 18 per cent of Poland’s power.

Steve Sonnenberg, Emerson’s president, said: “Our industry and automation experts understand the challenges power generators face in building and running ultra-supercritical units. Each project provides new opportunities for our team to demonstrate not only our technologies, but our design and engineering capabilities.”

Emerson also announced in September that it had won a contract to install its Ovation control system at a new 1075 MW unit being built by Mitsubishi Hitachi Power Systems (MHPS) at Poland’s ultra-supercritical 2820 MW Kozienice power plant. The new unit is set to come on line next year.