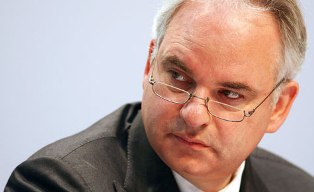 E.ON has sold off its stake in a major waste-to-energy company in Germany. The news came the day after the company announced another disappointing quarterly performance.

The country’s largest utility, led by Johannes Teyssen (below) held a 49 per cent share in EEW Energy from Waste, before selling it to private equity company EQT.
EEW Energy from Waste operates 19 waste incineration plants and produces electricity, district heat and steam for industrial use.

Meanwhile the company continues to suffer from its failing power plant business, soon set to be spun off.

First-quarter earnings before interest, tax, depreciation and amortisation (EBITDA) fell 9 per cent to $3.21bn the company said on Thursday.

The decline was mainly driven by an 18 percent drop in profits at the group’s generation business, hit by the closure of gas and coal-fired power plants that are being increasingly replaced by renewable sources such as wind and solar.

The new spin off company, to be called Uniper, will be listed on the stock exchange at some point during the second half of next year and its assets account for roughly half of E.ON’s current profits.