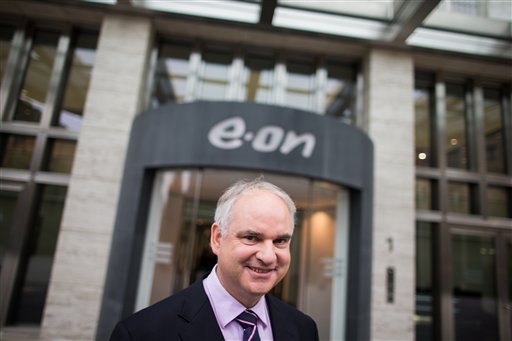 Germany’s largest utility has cited various reasons for an eight per cent rise in Q1 core earnings, with improvements in its wind power division and gas trading to the fore.

“Our first-quarter results indicate that parts of our traditional operating business remain under pressure,” said chief financial officer Michael Sen. “That’s why it’s all the more important that since the start of the year, E.ON‘s transformation has moved forward according to plan,” he said with reference to its new Uniper business.

A gas deal reached with Russian supplier Gazprom in March allowed E.ON to release some of the provisions it had made in prior years. Earnings before interest, tax, depreciation and amortisation (EBITDA) were at EUR3.1bn($3.5bn) in the first three months of the year, higher than the EUR2.91bn average analyst forecast in a Reuters poll.

In addition the company, led by CEO Johannes Teyssen (right), said it had put two new offshore wind power generation plants and one new coal-fired plant in the Netherlands on stream.