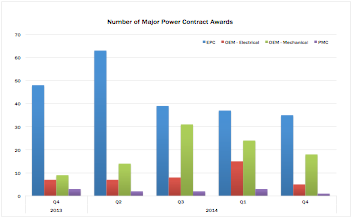 The latest EIC Monitor report shows an overall drop of 25 per cent in contracting activity across UK power generation sectors in Q4 2014.

However the study’s authors say that despite the data, better news may lie ahead for the UK as the country’s capacity auctions were just announced at the end of last year.

On a brighter note the results of the Capacity Auction were announced at the end of 2014, which could be a source of optimism for the UK power industry throughout 2015 and beyond. At the same time, the US and India remain highly active in the global power industry and there was also an upturn in UK wind turbines.

The number of major contracts (EPC, OEM Supply and PMC) awarded globally across thermal, nuclear and biomass developments decreased by 28 per cent since Q3 2014. However, there was an upturn in wind turbine supply contract awards in the UK, rising 40 per cent (2 contracts) on Q3 2014, according to the EIC Monitor quarterly report from the Energy Industries Council (EIC).

North America has dominated EPC contracting activity on global power projects, accounting for 11 EPC contracts – nine in the US and two in Canada. In the US, the majority of EPC contract awards have been for work on gas-fired power plants as the country’s shale gas production continues to drive a shift to gas-fired generation.

The US was also home to the sole nuclear decommissioning contract in Q4 2014, which was awarded to Holtec International to construct an underground storage facility for used fuel at Southern California Edison’s San Onofre Nuclear Generating Station (SONGS), located in San Diego County, California.

In Q4 2014, there was also a significant level of EPC activity in Europe and Asia Pacific, with six EPC contracts awarded apiece across several countries in each region. In Western Europe, two of a total of three EPC contracts for biomass plants were awarded, one to a consortium of Babcock & Wilcox Vølund and Interserve for work at Viridor Waste Management’s Oxwellmains Energy from Waste plant in East Lothian, Scotland. The other contract was awarded to Abengoa to build Belgian Eco Energy (BEE)’s 215MW Ghent Biomass Power Plant in northern Belgium, which is set to be the largest biomass plant in the world on completion.

In Eastern Europe, three EPC contracts have been awarded in the last quarter: Turkish utility TEIAS has appointed Prysmian Group to build the 2GW Lapseki-Sutluce Submarine Power Cable, which will connect the Anatolian side and Thrace side of Turkey; EPCG has awarded a consortium of Energoinvest and Energomontaza a contract to construct a 400kV transmission line section at the Pljevlja 2 lignite-fired plant in northern Montenegro; and Paks Nuclear Power Plant Company has awarded Russian giant Rosatom a contract to build two new units at its Paks nuclear power plant as part of a modernisation and expansion programme for the plant, which is located in central Hungary.

Meanwhile, Rosatom continues to secure contracts on nuclear programmes overseas. In Vietnam, Rosatom subsidiary Atomenergoproekt has been awarded an EPC contract by Electricity of Vietnam to supply two AES-2006 reactors for the Ninh Thuan Nuclear Power Plant No 1 in the Thuan Nam District, south-eastern Vietnam.

Elsewhere in the Asia Pacific region, Indonesia and Malaysia continue to rely on coal-fired plant for their power needs. In Indonesia, Hyundai Engineering Company has been awarded a contract for EPC work on the 200MW PLTU Kalsel-1 Coal Fired Power Plant in South Kalimantan, while in Malaysia, Shanghai Electric Group and Sarawak Cable Berhad have been awarded an EPC contract each at the 600MW Mukah Balingian Coal Fired Power Plant in Sarawak.

In Thailand, Hitachi has been contracted to carry out the EPC work for the Chaiya Phum substations, which includes the supply 500kV of gas-insulated switchgear. Across the Bay of Bengal in Sri Lanka, Alstom T&D India has been appointed by the Ceylon Electricity Board to supply its energy management system, e-terraplatform, to monitor and control Sri Lanka’s electricity transmission network.