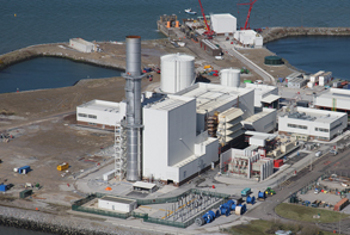 Gas Networks Ireland are considering the development of a carbon capture and storage facility off the coast of Cork, Ireland.

The €1bn would involve capturing CO2 from Whitegate and Aghada à¢€” two gas-fired power plants in the area à¢€” and storing it at the Kinsale gas field, which is expected to be exhausted within a few years.

It could be the first CCS facility in the EU, as several other schemes have been cancelled or postponed in recent years. The UK government recently cancelled the Peterhead CCS project, citing costs, although recognising the technology’s potential. Another initiative in Rotterdam was also shelved by the Dutch government.
Brendan Murphy, commercial and regulatory manager at Gas Networks Ireland, a state-owned company, told the Times there were “unique factors at Kinsale that could make [CCS] viable where it isn’t in other places”.

“The beauty of it is you can use the existing pipe network, which has been used to take the gas from the field for the past 30 years,” Murphy said.

“You also have a gas field that will have to be decommissioned at cost, so you can save that money. Most of the fields being looked at elsewhere for storing gas require CO2 to be injected at very high pressure, so the CO2 has to be compressed to liquid form and pumped in. But the Kinsale field is a relatively rare low-pressure field, so you can leave the CO2 as a gas.”

Power Engineering International spoke to Cambridge University Senior Lecturer in Technology Policy Dr David Reiner, about the potential for an Irish project and the larger implications for European neighbours in terms of possible participation in such a facility.

“These are two of the largest point sources of CO2 in Ireland with good access to storage sites in the Irish Sea and so would be an obvious place to focus any attention on capturing and storing CO2 in Ireland.à‚  Such an initiative would also help Ireland meet more ambitious climate targets.”

“To date, most of the focus on shared CO2 storage and associated infrastructure has been on the North Sea, with Norway and to a lesser extent the UK (Scotland in particular) putting forward the idea that other countries such as Germany and theà‚ Netherlands could use the northern North Sea for storage.”

Dr Reiner, a former adviser on energy policy to the UK government, also told this website that the Cork project could also be of benefit to neigbouring countries, if economic feasibility could be provided.

“An Irish Seaà‚ storage facility would obviously be most relevant to nearby facilities that emitted CO2 on the west coast of the UK, notably in South Wales such as the Port Talbot steelworks, or even further afield such as North West England (e.g., Merseyside) or northern France. Although technically feasible, the question that still looms over any CCS project is economic viability since providing a storage facility, in and of itself, would be insufficient to kickstart a project.”

“More generally though, with the UK planning to leave the EU as a result of Brexit, the main champions of CCS in Europe (Norway and UK) would be outside of the EU and so having member statesà‚ such as Irelandà‚ advocating for CCS from within the EU would allow the issue to remain on the EU agenda.”

Gas Networks Ireland began investigating CCS because it wants to find a long-term role for gas, a fossil fuel, at a time when emissions must decrease. The government’s climate plan, published this year, states that CCS at gas-fired power stations “could facilitate decarbonisation of our electricity sector”.

Murphy said: “We need to reduce emissions by 80 per cent by 2050, and we’ve been thinking about the role gas will play and what we can do to get to the point where gas is an endgame solution.”

More gas stations could be built in Cork to maximise use of the storage facility. It could also store CO2 from facilities such as waste incinerators, Murphy said. The current phase of the feasibility study is expected to be completed next year.

The EU is planning a climate “innovation fund” for 2021-30, funded by sales of CO2 permits to industry. Billions of euros will be available for low-carbon technologies, including CCS.