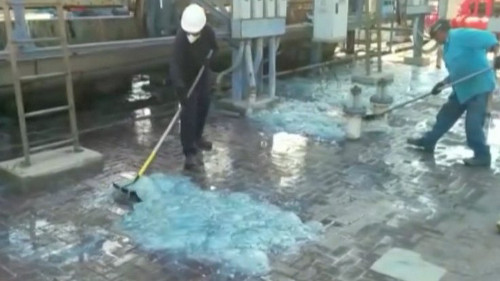 A potential shutdown of an Israeli power plant due to invasion by a swarm of giant jellyfish has been averted, local media have reported.

“Our coal-fired power stations are located by the sea because it takes a lot of water to cool them down,” Israel Electric spokesperson Iris Ben-Shahal told Israeli newspaper Haaretz. “At that entry point of the water into the cooling systems, we have filters to keep foreign bodies out,” she explained. “The jellyfish, and other things like sea plants, stick to the filters and clog them.”

Although jellyfish swarms cannot be predicted, the plant operators were reportedly prepared for the influx. Workers repeatedly cleared the filters during the swarm, moving the creatures to special containers for subsequent disposal. Getting rid of them entails either returning them to the sea or burying them in co-operation with the Environment Ministry, Ben-Shahal said.

Jellyfish experts have identified the swarm as Rhopilema nomadic, a species originating in the Indian and Pacific Oceans which is viewed as invasive in the Mediterranean Sea.