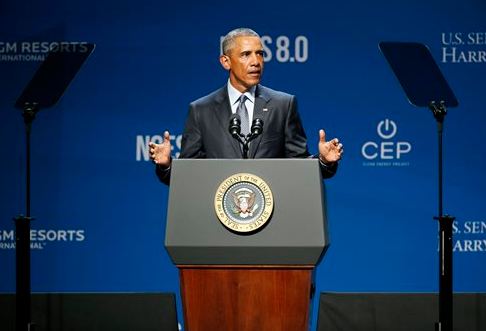 The US federal government’s Clean Power Plan has a simple aim – to cut carbon emissions from America’s fossil-fuelled power plants, by 32% by 2030.

However, if carried out successfully, the plan would also have a dramatic effect on emissions of the more conventionally-recognised pollutants and deliver very considerable public health benefits, says the Environmental Protection Agency. Emissions of sulphur dioxide would be reduced by 90%; and emissions of oxides of nitrogen by 72%.

Much of the emphasis is on old, inefficient coal and oil-fired power stations – of which there are 1,000 in the US, with 3,100 units covered by the new plan. And they are old – the average age of existing coal-fired units is 43 years; for oil, 46 years.

However, the Clean Power Plan is not very popular in business circles in the US – it’s going to cost money, damage the coal industry and electricity consumers will have to foot the bill. But it doesn’t have to be this way – says the International District Energy Association (IDEA) in a new white paper, which suggests that the new plan is an invitation for states to begin a programme of investment in CHP and district energy schemes similar to those that have been delivering Clean Power Plan objectives by design for decades – and cutting consumer energy bills.

The combination of CHP’s inherently-high efficiency and the ability of district energy networks to distribute heat to client buildings looks like a text-book response to Obama’s plan. It’s the classic argument in favour of CHP – immense quantities of ‘waste’ heat should not be discarded to the environment when, with CHP that heat can be put to use. There are no new technical challenges, and 700 district energy systems in US cities and campuses already aggregate the energy demands of local buildings to maximise efficiency.

The EPA has said that both electricity and useful thermal energy can be counted when quantifying the energy output from generation units – so the efficiency benefits of CHP are rewarded. And, to make clear the scope for improvement, the IDEA white paper says that power industry today operates at an average efficiency of just 34%, discarding as waste enough thermal energy to supply the total energy needs of any country in the world, apart from the three largest.