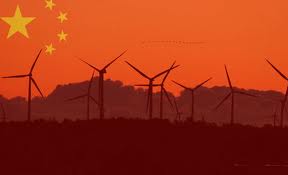 Thermal power use grew by 0.3 per cent in 2012, an addition of 12 terawatt hours (TWh) more electricity. In contrast, wind power production expanded by about 26 TWh. This rapid expansion brings the total amount of wind power production in China to 100 TWh, surpassing China’s 98 TWh of nuclear power.

The biggest increase, however, occurred in hydro power, where output grew by 196 TWh, bringing total hydro production to 864 TWh, due favorable conditions for hydro last year and increased hydro capacity.

According to the Energy Collective, coal still accounts for 79 per cent of electricity production in China, but that dominance is increasingly challenged by competition from cleaner energy, as well as government policies and public concerns about air pollution.

The Chinese government’s 12th five year energy plan (2011-2015) aims for coal to be reduced from 70 per cent to 65 per cent of energy production by 2015, while aiming for the share of non-fossil fuels to reach 30 per cent of installed electricity generating capacity by the end of the same year.