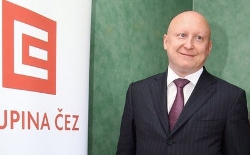 Czech utility CEZ is pondering the dividing up of its business, similar to a decision taken by German counterparts, RWE and E.ON.

Chief Executive Daniel Benes told Lidove Noviny newspaper the utility may be forced to consider a split into two parts in the future, one responsible for enlarging nuclear power plants, and the other focusing on new sources of energy.
In common with other EU utilities, CEZ’s fortunes have declined since the 2008 financial crisis. The company responded by developing its renewable and new energy business while selling off its older coal plants.

It is also looking to expand its nuclear power fleet but has run into financing issues after failing to secure price guarantees from the state, its 70 per cent owner.

“Either we find a compromise and we will fulfil all the targets in an optimal way, or the shareholders come to a conclusion that it is better to follow the path on which the company could split for example,” Benes said.