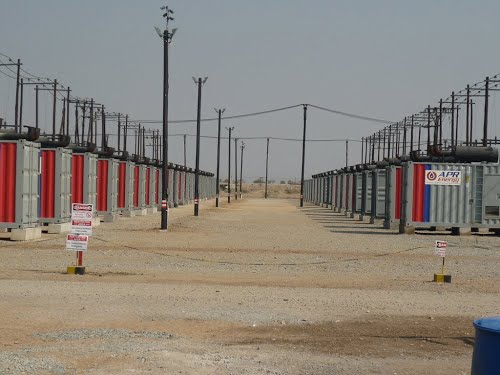 State-owned Botswana Power Corporation (BPC) has bought a 70 MW diesel-fired power plant which it had been renting since 2009.

The five-year rental contract for the Matshelagabedi plant (pictured), owned by US-based fast-track power firm APR Energy, had been extended for an extra year in January 2014.

Botswana’s Ministry of Minerals, Energy and Water Resources said in a statement that it plans to expand the plant by 35 MW. “The aim is to complete the extension by the onset of the cold season this year and the procurement process is currently ongoing,” the Ministry said.

Botswana has suffered from regular power cuts after ongoing equipment failures at the 600 MW coal-fired Morupule B plant, which provides around 80 per cent of the country’s energy. Matshelagabedi and the 90 MW dual-fuel Opara power plant have reportedly been crucial to avoiding further power outages.

As part of ongoing efforts toward a secure energy supply, last week the government opened a tender to convert the Opara plant, which currently runs on diesel, to run on coal bed methane gas. According to government estimates, the conversion could reduce the cost of producing power at the plant from $0.24/kW to around $0.10/kW.

In addition, the government is currently tendering for a 300 MW extension to Morupule B, scheduled for completion in 2018, and another tender is planned for a 300 MW coal-fired power plant and associated mine. Plans are also reportedly in the works for a 100 MW renewable energy plant (technology unspecified).

In the interim, however, Botswana has had to step up its power imports from South Africa, which is in the midst of its own energy difficulties.