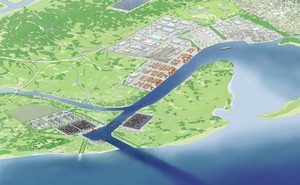 In what commentators have labelled the nation’s most expensive power project to date, Bangladesh‘s government has approved the construction of a coal-fired power plant in the Cox’s Bazar district near the Bay of Bengal.

The 1200 MW Matabari ultra-supercritical coal-fired plant (artist’s rendition, pictured) will cost in the region of Tk360bn ($46m),or 14 per cent of the country’s 2014-15 budget. The project is to receive support from the Japan International Cooperation Agency, which will contribute Tk290bn, with the Bangladeshi government putting in Tk40.9bn and state-owned Coal Power Generation Company Bangladesh Ltd (CPGCBL), which is to develop the project, contributing Tk20.1bn.

The project was given the go-ahead this week at a meeting of the Executive Committee of Bangladesh’s National Economic Council, headed by the Prime Minister, Sheikh Hasina. When completed, it will be Bangladesh’s first coal-fired power station.

According to the project summary issued by CPGCBL, the plant is expected to reach 41.9 per cent efficiency, beating the nation’s other thermal power plants, none of which have an efficiency of more than 34 per cent.

In addition, CPCGL said the plant’s technology will significantly reduce NOx, SOx and ash emissions. The plant will be cooled with ocean water, which will also provide steam ” another first for a Bangladeshi plant.

Matabari’s two 600 MW units are to run on imported coal.

Wider plans include the construction of a residential area and a water treatment plant near the power station, as well as two additional power plants and a LNG terminal to be built in future.