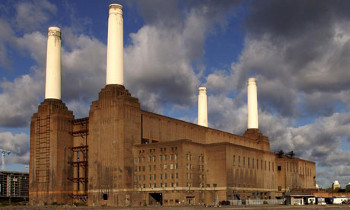 A Danish architect has proposed replacing the smokestacks of the historic Battersea power station in London, UK with Tesla coils.

Bjarke Ingels reportedly proposed the move during a recent lecture at London’s Royal Academy. The architect’s firm, BIG, has been contracted to design a public park that will be part of the decommissioned coal-fired power plant’s redevelopment into homes and offices.

In his plan, the coils will be powered by the footsteps of the around 50,000 visitors to the site per day, captured by piezoelectric generators embedded in the pavement.

“It could be interesting to create a public artwork that ties into the heritage of the power plant,” Ingels was quoted as saying by design magazine Dezeen. “We don’t have coal any more but we do have 50,000 people passing by every day.

“Just looking into the available technology of piezoelectric pavements, we just did the simple math. With 50,000 people walking over it every day we would actually be able to generate quite a large amount of energy.

“I have to say that we haven’t fully persuaded the client to do it but we have a rock-solid feasibility study,” he added.

Battersea power station (pictured) was commissioned in two stages, in the 1930s and 1950s, and went offline in 1983. After being slated for demolition, a redevelopment plan was put in place in 2012.