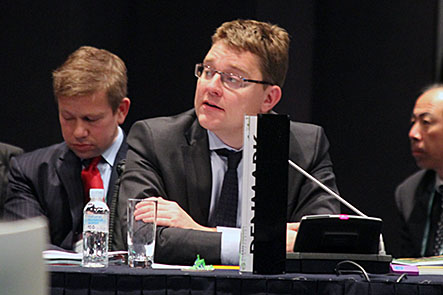 The Danish Energy Association (DEA) has released analysis showing that wind power has overtaken all other fuel sources as the cheapest new form of electricity in the country.

Denmark is reaping the rewards of a long-term commitment to wind power and the study has concluded that new onshore wind plants coming online in 2016 will provide energy for about half the price of coal and natural gas plants and will cost around 5 euro cents/kWh.
“Wind power today is cheaper than other forms of energy, not least because of a big commitment and professionalism in the field,” said Rasmus Peterson, Danish energy minister (pictured above). “This is true for researchers, companies and politicians. We need a long-term and stable energy policy to ensure that renewable energy, both today and in the future, is the obvious choice.”

The DEA analysis, which was based on a 4 per cent interest rate and International Energy Agency fuel and carbon price forecasts, found that wind would still be the cheapest energy source if interest rates increased by 10 per cent. It also stressed “that the analysis was not based on a full cost-benefit assessment of different technologies that included an assessment of environmental benefits, taxes or subsidies.”

The Danish government is ambitiously targeting a 50 per cent goal for wind power’s share of  total electricity consumption by 2020. By that year, the country aims to produce 70 per cent of its energy from renewable source, rising to 100 percent by 2050.

Think Progress reports that onshore and offshore wind power will make up most of this capacity and the government has been highly proactive in overcoming the community resistance that has complicated wind development in other nations.

In May, Kristoffer Böttzauw, the deputy director general of the DEA, said that in 2008 the government introduced new requirements that directly compensate residents for any losses. For example, if a house loses value after a wind turbine goes up nearby, the operator must compensate the owner for the loss. Also, at least 20 per cent of the shares for any project must be offered to local residents, giving them a more direct stake in the undertaking.

To reduce the imposition of new power lines, most of the cables are being laid underground. This is an expensive solution but one that was deemed necessary according to Böttzauw, who said “locals could not be expected to put up with new utility poles in addition to the towering turbines.”

An early adopter of wind power since the 1970s, Denmark has benefited from falling technology costs and high levels of investment in clean energy. As a result it plays host to a number of the major market leaders including Vestas and Siemens, as well as a large wind turbine supply chain.