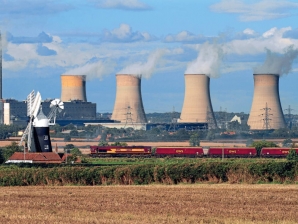 Alstom (Euronext:à‚ ALO) has won a contract from EDF Energy (Euronext:à‚ EDF) to improve efficiency at the West Burton and Cottam coal power plants in England.

The contract involves a retrofit of intermediate pressure (IP) turbines at West Burton and Cottam coal-fired power plants. The retrofit will improve the efficiency and extend the life of turbines at the two EDF Energy power stations.

West Burton and Cottam power stations are both rated at 2,000 MW and are located in Nottinghamshire in the East Midlands region of the country.

The contract entails replacing the inner cylinder and fitting a new rotor and blades on Cottam 2 and West Burton 1. The work will improve the heat rate, reset the life of the major IP turbine components, and ensure lower maintenance costs for the remainder of their life.

In an emailed statement, Steve Jones, Vice President Alstom Power Thermal Services ” North Europe Area, said: “We’ve already successfully carried out retrofits on both low pressure and high pressure turbines at both stations and look forward to continuing our relationship with EDF as we help make their turbines more efficient and reduce their maintenance costs.”

The work is due to be completed in Spring and Summer of 2014, with both turbines being installed within existing planned outage windows.