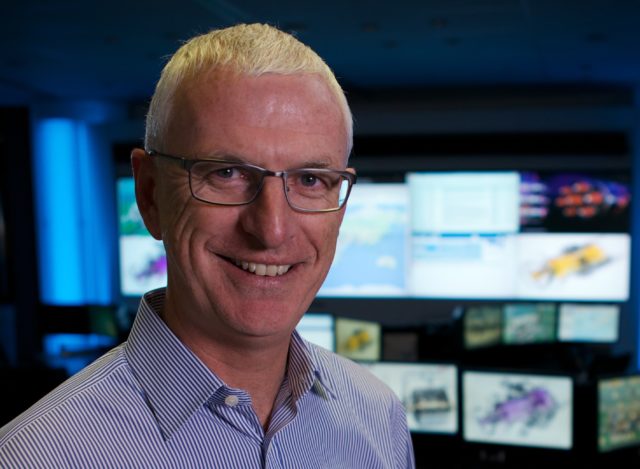 GE celebrates the first anniversary of its acquisition of Alstom on November 2nd and President and CEO of Power Services, Paul McElhinney, says the company’s improved scope in terms of offerings is becoming increasingly evident.

At a press briefing at the company’s European Baden, Switzerland offices on Friday, McElhinney spoke about the power unleashed by GE and Alstom coming together, placing particular spotlight on additive manufacturing and digital ‘Total Plant’, solutions which he believes will have a fundamental impact on the power industry over the next decade.
Referring to its newly found total plant capability, he said, “We honestly, without Alstom, might have tried to do this because that is where our customers in their conversations want us to go but we would have been challenged in our ability to do it because of lack of expertise in certain parts of the plant.”

“Alstom is very strong on boilers, very strong on balance of plant, very strong on steam, on generator and when you marry it to GE strength on gas, its complementary technology taking the best of both. It’s an interesting new generation of upgrade offerings which are frankly better than either company could have done on their own.”

“We are one year old next week and a much better company.”

Twelve months on from the deal being sealed, GE has gradually started to see the substance emerging from pooling resources with Alstom. While cultural assimilation continues, it is the extent of technological offerings coming to the fore that is causing most excitement.

McEllhiney admitted GE has never serviced a boiler in its entire history. The new reality where the company can engage on the total plant, rather than six different conversations with individual service providers for individual pieces of equipment on the power island, is vastly preferable.

While the recent Paris agreement seemed to be another nail in the coffin of the coal-fired power industry, GE aren’t quite seeing it that way. They’re taking a pragmatic approach to helping their global client base, particularly in Asia, meet the regulatory challenge posed by COP21 rather than burying heads in the sand.

“Coal is an interesting topic when it comes to power gen because depending on where in the world you go you hear coal is dead, has no future. Our view, if you look at the next 25 years, is that coal remains relatively flat in terms of the percentage of generation globally. Renewables and gas increase but coal stays relatively flat.”

“So we have developed a specific suite of offerings around coal fired power plants that recognise the challenges our customers have based on the Paris agreement. COP21 now forces our customers to have to consider fairly significant changes to coal plants in order to comply with the requirements countries have signed up to. We’ve developed plant-wide solutions that can reduce emissions by double digits, improve efficiency by 4 plus per cent, really transform the efficiency and operating environment of some of those coal plants so that they are significantly more attractive in a post Paris world.”

A part of the integration of Alstom’s expertise into the company is manifested in the recently launched Fleet360 platform, which showcases its improved total plant capabilities to service both GE and cross-fleet power generation equipment for utility and industrial plant operators worldwide.

It allows for customized solutions for operators that deliver better performance and value for their entire fleets. McElhinney says that while the world will experience fluctuating demands for energy in various regions, over the long term, the demand for power is expected to rise by 50 percent over the next 20 to 25 years, placing a greater priority on utilities to keep their existing generation assets operating at optimal performance levels.

“On the gas side we have started to incorporate digital in a big way into how we talk to customers and offerings provided to customers. It’s part of the digital initiative journey we’ve been on for four hand a half years and very personal to (CEO) Jeff Immelt who really spearheaded this since then.”

What used to be perceived as almost an obscurity in the business, or a hard sell, is now a staple dialogue in the power sector.

“It’s remarkable. When I go around the world and speak to CEOs of our customers – until last year digital was like a forced topic; for most customers it wasn’t a natural topic of conversation.”

“There were some very early adopters but for most customers it was something we brought into the conversation, something that didn’t happen naturally – I would say that this year every conversation with every customer anywhere in the world digital is brought up by the customers.”

The transformation of attitudes is part of a broader change brought about due to economic pressure. Digital is now being trusted as a means of surviving and gaining in an increasingly competitive scenario. GE has seen the benefits for itself.

“There is a recognition that industrial productivity has effectively stalled. We are all in a slow growth world. So customers are being forced to find ways to generate their own growth. The environment is not creating enough demand for customers so the focus has been more on creating internal productivity.”

“All of the things we have done in digital we have started internally in GE, so before we went to customers and said this what the benefits of digital could be we took digital and adopted it internally for use in our own factories, shops, our own manufacturing processes, our own industrial platforms and it has driven significant productivity inside GE.”

Some of the earliest adopters, McEllhiney notes, were the most ‘challenged’ in the sector. In Europe where market pain is most visibly acute, digital is becoming almost a necessity, he says.

“Now with certain parts of Europe and the world its more about getting on the grid fast when the demand manifests and get off the grid fast which translates in our world to start up time and turn down time. We take digital without any hardware changes to the equipment and we have been able to dramatically reduce start up time and turn down time so customers can be a lot more agile in terms of trying to take back the benefit of market opportunities.”

Another exciting development accelerated by the acquisition is the prospect of additive manufacturing or 3D printing of power plant solutions. The press team who visited Switzerland last week were treated to a demonstration of GE’s work in this area.

Additive manufacturing, or 3D printing refers to processes used to synthesize a three-dimensional object in which successive layers of material are formed under computer control to create an object. Objects can be of almost any shape or geometry and are produced from digital model data 3D model or another electronic data source such as an Additive Manufacturing File (AMF) file.

Last week the company celebrated the installation of the world’s largest 3-D printed part in its GT13E2 gas turbine at Vattenfall’s Heizkraftwerk Berlin-Mitte power plant in Germany. The 3-D printed Combustor Zone 1 Segment, which was manufactured at GE’s plant in Birr, Switzerland, weighs 4.5 Kg and is the size of a laptop.

GE has been working with the technology for around six or seven years and its seen as having a likely huge impact on cost and cycle times as it continues to develop. It also offers a perfect complement to the company’s growing digital prowess.

“When you think of the future, consider a repair shop, we have 53 such shops around the world. Potentially we are coming to a point where we can print parts at the customer site, not in the next few years but eventually. Fundamentally that changes your mindset around the concept of footprint, of repair shop, warehouse, inventory costs and cycle time.”